Jamaicans to get acquainted with Cockpit Country 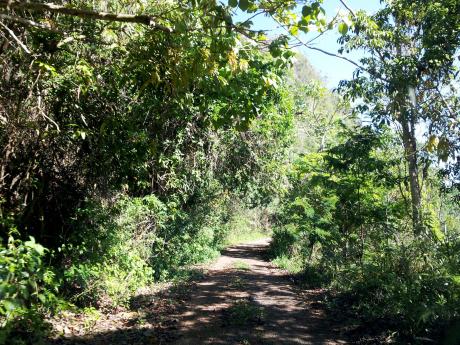 PHOTO BY PETRE WILLIAMS-RAYNOR A section of the Cockpit Country reserve in Trelawny.

THE PUBLIC is in for a veritable feast of facts and figures about Jamaica's Cockpit Country, an area teeming with endemic animal and plant life, and which supplies some 40 per cent of the island's fresh water.

This is courtesy of a public education campaign, called 'Cockpit Country is Our Home', which is to begin this month with funding to the tune of US$25,000 from the Windsor Research Centre (WRC).

The campaign - to include a series of advertisements, news features and the use of social media to explore themes including water, forests, pollinators and beauty - comes as the Government appears near a decision on a boundary for the Cockpit Country.

A boundary for the area has for several years been the subject of public debate even as civil-society actors working in conservation, together with the Maroons who call the area home, advocate against mining there.

In July, Colonel Oral Khan, chief technical director in the Ministry of Water, Land, Environment, and Climate Change, told The Gleaner that his ministry was to hold discussions on the subject with the Ministry of Science, Technology, Energy, and Mining.

This, following a report on the public consultations held last year on defining a boundary, led by the Centre for Environmental Management headed by Dr Dale Webber.

The report, among other things, warned Government against authorising "any form of exploration of mineral deposits, mining and quarrying activity" in Cockpit Country.

"The level of emotion is too high and the level of opposition and resistance by community members and leaders, commu-nity-based organisations, non-governmental and civil-society organisations, some governmental agencies and members of the academic community may not provide enough guarantee and confidence for potential investors," reads the report penned by Webber and colleague, Dr Claudel Noel.

It is against this background that the campaign is to be run, as organisers move to inspire Jamaicans to take ownership of the Cockpit Country, putting it beyond the reach of mining interests and promoting its

"We hope to get everyone excited about and interested in the Cockpit Country and the topics we present; to anticipate reading, listening to, watching the videos and participating in the campaign as it unfolds," said campaign manager Esther Figueroa, an independent filmmaker with a 2012 film that shares the campaign's name.

In addition, Schwartz said the campaign should afford policymakers and politicians the opportunity to gather facts on the Cockpit Country to inform their decision on the boundary and mining.

"We are a research centre; we do science. We don't do religion and things like that, so we think that, for discussion, the people participating in the discussion actually need to have some facts and knowledge on which to base their decision," he posited.