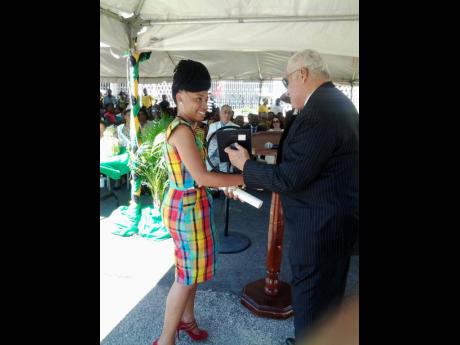 Member of Parliament, Mike Henry (right) making a presentation to 21-year-old Sasha-Gay Belnavis, an arts teacher at the JCDC Clarendon Parish Council awards ceremony on Monday. The awards ceremony took place in May Pen, Clarendon, on the grounds of the courthouse. 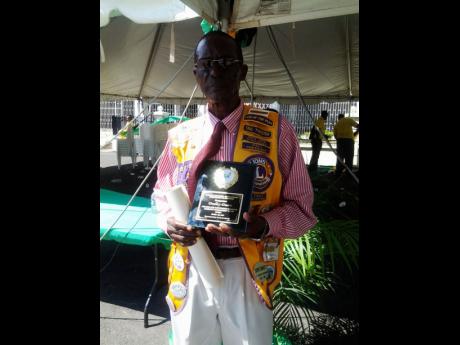 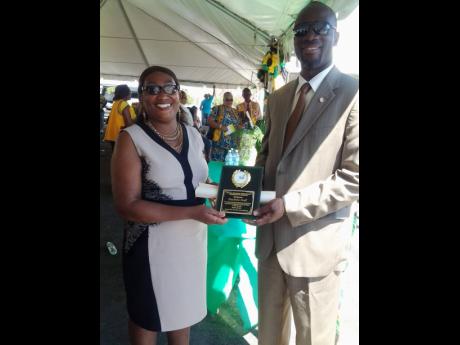 The Jamaica Cultural Development Commission (JCDC), in collaboration with the Clarendon Parish Council, bestowed awards on four of the parish's citizens who have contributed tremendously to the parish's development in the arts, community development, and education on Monday, (Heroes' Day) in May Pen, Clarendon.

In a glowing tribute to the education philanthropist, Otis James, Miss Clarendon Festival Queen 2014, Petrina Williams, said James found the scholarship programme which he named the James and Friend Education Programme some nine years ago primarily to provide an educational opportunity for vulnerable children in Clarendon.

James' appreciation for education propelled him to created one of the most progressive and inclusive youth-education programmes in Clarendon," said Williams, reading from a citation to James.

The programme, with the support of sponsors, has grown tremendously, and to date, 140 students' educational needs are met through James' initiatives right here in Clarendon," she said prior to the presentation of the awards.

Arts aficionado, Sasha-Gay Belnavis was saluted for her dedication to the performing arts, which earned her numerous awards at the parish and national levels in the performing-arts competitions.

A graduate of the Edna Manley College of the Visual and Performing Arts, Belnavis won the Louise Bennett Memorial Arts Scholarship. She is renown storyteller, who won awards three consecutive years for her tales.

"Belnavis is a lover of the performing arts, and was an entrant in the JCDC's annual speech and drama competition for five years. She has mastered this competition with her numerous awards," Javani Brown, a student of Clarendon College said in saluting her.

She is currently a volunteer teacher at her alma mater, Claude McKay High Javani Brown said.

Educator, Paulette Hall, a 39-year veteran in the classroom and who won nine medals in the JCDC's performing arts competition, was described as an inspiration to many within and outside of her community, notwithstanding the fact that she is living with lupus.

"Paulette Hall is a remarkable educator, community development advocate who has been a source of inspiration to those within her community of James Hill and outside. And despite her lupus condition, it has never deterred her from being committed to her job and service to her community," Shashana Rickman, a runner-up in the 2014 Clarendon Festival Competition said.

"We salute you as a role model, who is dedicated, persistent, confident, and has positively impacted the community development, and by extension, Clarendon," Rickman declared in a rousing citation to the veteran educator.

Last but certainly not least to receive the parish honours was Donald Quare, a gentleman was introduced as a full-time volunteer in his community. His selflessness, according to Mineral Heights Primary's Paulton Walker, is exemplified in his 31years of service to the Lions Club of Clarendon, where he served on two occasions as president.

"Mr Quare can be best described as a full-time volunteer, he is dedicated to making the parish of Clarendon a better place to live as exemplified by his three decades of service to the Lions Club of Clarendon and chairman of Sight Conservation," declared Paulton Walker in his salutation of the community advocate.