‘Pour me a drink of cassava punch’ 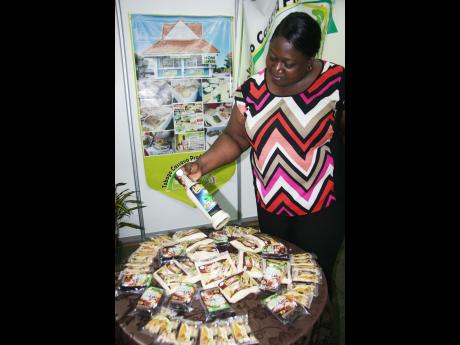 Christopher Serju Photo Nathisha Charles Pantin of the Tobago Cassava Shop speaks about the Cassava Colada, a very popular alcoholic beverage made from the tuber as an alternative to the popular pina colada. 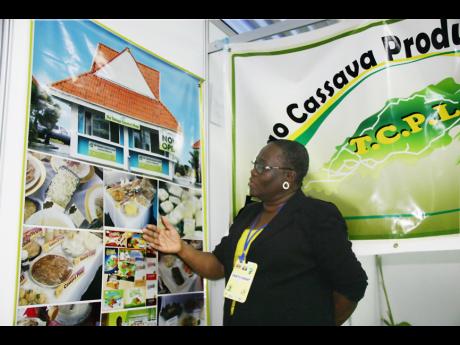 Christopher Serju Photo Pathleen Titus, chairman of the board of the Tobago Cassava Company Limited points out some out of the products made from the root crop.
1
2

While Jamaica continues to dawdle with a long-touted push to increase the production of cassava, at least one regional state is going full steam ahead with the tuber and Jamaicans could soon see drinks, cakes and even ice cream made from cassava on local supermarket shelves.

With earnings from sugar and banana, two of the traditional pillars of regional agriculture on the decline, the cultivation of roots and tubers, as well as herbs and spices is being promoted as the next avenue of earning for small farmers.

For many regional states, including Jamaica, the possible earnings from cassava is now being looked at with farmers being encouraged to move into this crop.

But in Tobago, cassava is already making waves and a team from that island, part of the twin-island republic with Trinidad, was at the recent Caribbean Week of Agriculture hosted by Suriname showing off the creative use of the product.

?We came here to attend the value-chain workshop and brought some of the cassava-based products to see how they would be received, and well as you can see, the label is quite attractive and I think it makes people want to draw to it and to taste what is in it,? Pathleen Titus, chairman of the Tobago Cassava Company, shared with The Sunday Gleaner.

Titus and her colleague, Nathisha Charles Pantin, who works in the Tobago Cassava Shop which serves as an outlet for agro processors, noted that the business has been growing slowly and are confident that with the implementation of their three-year strategic plan which involves heavy promotion of their products, business will pick up.

Cassava ice cream, available in a range of flavours ? cassava with beetroot, cassava and coconut, cassava vanilla, among others, is one of the hot, new items, and the popular Cassava Colada, an alcoholic beverage which along with the cassava punch are very popular with the men in Tobago.

Turning to the more familiar items, Titus explained that the cassava cake is different from the starch cake, with the cassava pone also on the menu.

?We have cassava farine, which is a traditional cereal product in Tobago, and we have the cassava khurma. Khumra is an Indian delicacy but we have added a health twist by putting in cassava and it?s a big seller, it?s a hit with the public in Tobago,? said Titus.

According to Titus, the growth in sales has been slow but steady with the shop?s location a major factor. ?It is on the Esplanade which is not on the well-beaten track, but we have daily sales from the shop, especially when we have tourists coming in from Trinidad. People are becoming more aware of it.?

The company and shop were set up with funding from the Tobago House of Assembly, following a successful food fair in 2011, which identified the need for cassava products, and the state is still paying staff salaries and all other expenses but plans are under way to achieving financial independence.

?Right now, the Cassava Company is in the process of implementing its strategic plan and we have product promotion as a prominent item. We have not given ourselves a timeline but are working so that at the end of three years we will become profitable enough so that we can cut the navel string and move on,? Titus disclosed.

She added that based on the response to their range of cassava products during Jamaica?s annual Denbigh Agricultural, Industrial and Food Show this year, the group is also exploring the export potential.

?We have no export orders yet, but based on our strategic plan what we are hoping to do is to have a building where we will have these small processors grow the cassava and process their products, adhering to global standards, so we can access international markets and maybe regional markets.

?We have farmers who we work with directly who supply us right now, and initially, when the company was set up we even had supplies from Trinidad, but right now we don?t need supplies from Trinidad, the farmers in Tobago who benefited from a CARDI (Caribbean Agricultural Research and Development Institute) project have really ramped up production and have demonstrated a commitment to supplying us.?