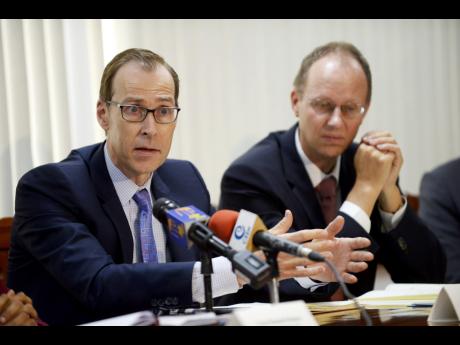 Outgoing head of the International Monetary Fund (IMF) mission to Jamaica, Dr Jan Kees Martijn, says he is sad to leave Jamaica but expressed delight that the country's economic reform programme appears to be on track.

It is standard procedure within the IMF that people move around from assignment to assignment, and Martijn, who has spent three years in Jamaica, says he is awaiting word on his new assignment. His place in Jamaica is being taken by Uma Ramakrishnan.

Jamaica is currently halfway through a four-year extended fund facility with the IMF. The main objective of Jamaica's economic reform programme is to contain the country's rising economic and external vulnerabilities and address economic imbalances, while putting the country on a path of sustainable growth.

"Over the last three decades, the Jamaican economy has experienced very low economic growth, declining productivity, and reduced international competitiveness. An important factor behind these problems has been Jamaica's unsustainable debt burden, which has undermined confidence and elevated risks to economic stability. Additionally, Jamaica's high debt service has limited the Government's potential to provide the services needed to achieve sustained rates of growth and increased welfare for its citizens," Martijn said following a staff-level approval for Jamaica's programme in 2013.

During a press conference held Tuesday at the Ministry of Finance offices at Heroes Circle in Kingston, Ramakrishnan said the implementation of the programme remained very strong, adding "all quantitative performance targets through March 31, 2015 were met, with the exception of the nominal Jamaican dollar target for the primary surplus of the central government which was narrowly missed because the revenue came in lower than projected during 2014-2015".

"The lower revenue reflected lower inflation and the impact of drought and other external shocks to growth," Ramakrishnan added.

Dr Peter Phillips, the country's finance minister, said that the four-year facility has been a challenging one, stating that while "we have successfully navigated the first two years, we still have much to accomplish".

"Our progress thus far is commendable by any standard and the results of our efforts, and the sacrifices made by many, have, in many instances, exceeded expectations," Phillips said.

"It is my understanding that passing seven reviews by the IMF's Executive Board without a waiver request is rare as is passing eight reviews with a single waiver," the minister added.

Noting that the country's revenue collection was impacted by several factors, such as lower oil prices, less currency movement, low inflation and drought, Phillips stressed that the 7.5 per cent primary surplus was indeed achieved.

"They, like us, believe that the missing of that dollar target is not reflective either of a failure on the part of the Jamaican authorities to do something or a reduction in our commitment to the basic objectives of the programme.

"It will not mean that the programme is off track in any way, and so they see it as a purely technical matter and they have said that Jamaica's commitment to the programme objective remains strong," the minister said.