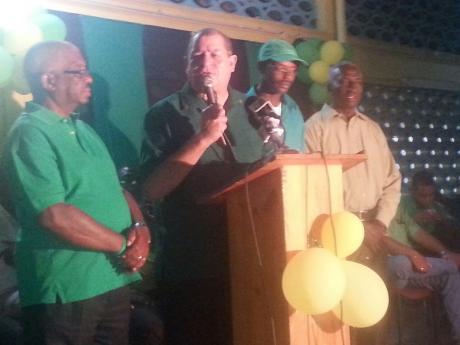 Having seen his winning margin sliced dramatically in the last general elections,  North East Manchester Member of Parliament has told constituents that he needs his dominance restored.

Shaw, referred to as a five-star general because of his record five consecutive election wins,  was only able to beat the People's National Party's Valentine Wint by 576 votes in the 2011 election.

This was a reduction from the 1,414-vote margin by which Shaw beat his challenger Paul Lyn in 2007.

The Member of Parliament was speaking at a divisional conference at the Christiana High School in his constituency.

He listed a raft of roads which he said have been repaired in this current term,  telling Labourites "me working and me not easing up".

Desmond  Harrison, the councillor for the Christiana Division,  also could not hide his displeasure with the fact that Shaw got 700 fewer votes in 2011 than in 2007 with the PNP increasing its margin by more than 750 votes.

"Don't be ungrateful when election day comes. Plenty of you have made a mistake in the last election and you need to repent," he said.

"North East Manchester is a brand name constituency. A word to the wise is sufficient. You're feeling the licks from the PNP government so you must know what to do."

Meanwhile, Harrison said that it is time that the JLP takes control of the Manchester Parish Council.

"If we want to send a message to the government,  I am of the view that we have to start with the local government elections," he said.

Local government elections became due in March and may be delayed until June.

The PNP controls all parish councils across the island and have 11 of the 15 seats in Manchester.

"In the entire history of the Manchester Parish Council, it is only two times that you have had a Jamaica Labour Party mayor at the council, the first one is the great Cecil Charlton and yours truly," he added.

At Sunday's JLP divisional meeting, several aspiring councillors spoke with optimism about their chances of winning their seats.

Harrison told them it is possible.