'Christian should stop being hypocrites' 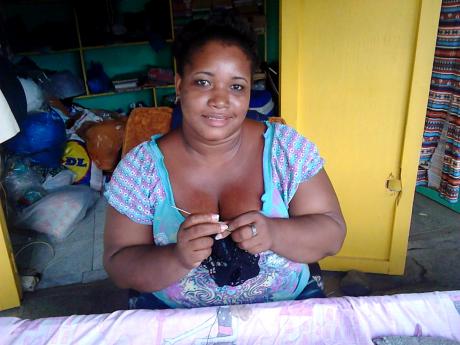 Gareth Davis
Nicky White tries to stay on the straight and narrow.

It is not an easy thing to abandon one's God and expect to enjoy the joy and splendour of life, and Nicky White, a back-sliding Christian, is finding that out.

Still fresh in the mind of the Portlander, is the day she surrendered her life to Jesus Christ, which brought her to a state of humbleness and acceptance, where she realised, probably for the first time, that all men were created equal and to obey the commandment of loving your neighbours as yourself.

"Before my baptism, I was a proud young lady. I just couldn't see myself socialising with certain types of people, who were loud and abrasive. I was a warm and gentle person, who despised boasters and show-offs. It was not in my nature to share what I had with anyone, and I cared and worried about self only. However, during several Bible studies, I realised that love conquers all," she said.

According to White, her understanding of love is that it involves caring and sharing with everyone, irrespective of culture, colour, race, or political affiliation. She noted that Bible study opened up a new chapter in her life, and that it was in 2007, that she got baptised at the Mount Gracious United Church of Jamaica and the Cayman Islands at Rock Hall, with the intention of serving God and to also assist the needy and less fortunate.

But as the years unfolded, White admitted that she became spiritually weak. She recounted that it was a church-related incident, which probably caused her to fall from grace. She also said it was a church brother, who attempted to rape her, but failed, and although she reported the matter to a senior member, she was shunned.

White noted that the hurt was too much, and shortly after, she started going to parties and carnival, and before long, she adapted to the ways of the world once again.

Continuing, White said: "I am well aware that being a Christian is the very best thing. I will return to church, at least one of these days, but that day has not yet come. Christians should show more love and care about their fellowmen, instead of being hypocrites. I hope that my story will be an inspiration to others. When mother, father, and friends turn their backs on you, then the Lord will take you up. I walked out on my God and I have learned the hard way."