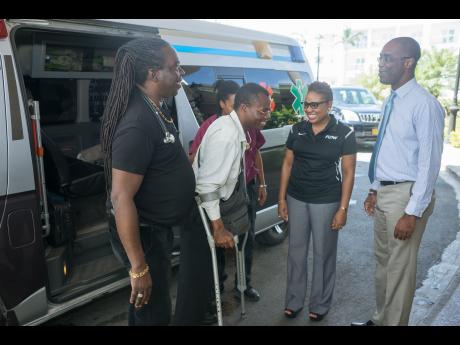 Telecommunications firm Flow has announced that it will expand its Fairview Montego Bay facility into a full-service flagship store serving western Jamaica.

"Work is now on in earnest to convert our facility in the Fairview Plaza into our second flagship store, so we are appealing to our customers to bear with us during the refurbishing exercise," Sommerville-Abrahams, whose company is a sponsor of the 10K/5K run and walk, told the gathering.

The news comes weeks after FLOW launched what Sommerville-Abrahams has tagged a refreshed, updated, unified brand of the consumer (retail) group, which resulted from the merger of two brands - Cable and Wireless and Columbus Communications.

"While we are part of a regional organisation, ultimately, we are "Jamaican Inside" and we have one common objective: connecting communities, transforming lives," she said, adding that happy customers were the cornerstone of a healthy company.

"We are committed to development in Jamaica, and Montego Bay in particular, and will continue to invest in state-of-the-art infrastructure and technologies that will place Jamaica on the cutting edge of telecommunications in the region," she said.

At the same time, Sommerville-Abrahams reiterated her company's commitment to education, underscoring that FLOW continues to be committed to supporting education.

"We will continue to drive education by expanding our free Internet in all government primary schools," she told the gathering, while participating in the $3-million handover ceremony.

Congratulating the scholarship recipients, Sommerville-Abrahams said FLOW would continue to support education in the west.

"This merger means we are dedicated and committed to Montego Bay, and indeed, all of Jamaica. We will continue to support community development.

She added that the company would also continue to invest in the BPO sector and expand jobs in Montego Bay.

"In the coming week, we will have some exciting offers and make some major announcements of our plans going forward," she promised.