Ex-soldier struggles to provide for family 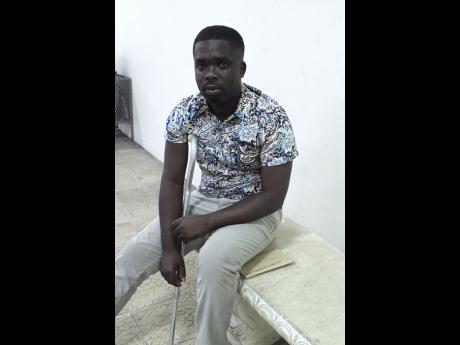 Tamara Bailey
PHOTO BY TAMARA BAILEY Ex-soldier Anthony Wilson speaks of his challenges after being injured on the job.

When 33-year-old Anthony Wilson enlisted in the Jamaica Defence Force (JDF), atop his list of priorities, next to serving his country, was ensuring his family was well taken care of. However, after his injures and dismissal from the army, those plans were crushed.

The physical pain of not being able to sit or stand for an extended period does not equate to the emotional pain Wilson feels for not being able to provide for his loved ones. An inadequacy for which he blames the JDF.

"On January 12, 2009, I went on a court escort in Montego Bay and while coming down the stairs, I misjudged a step and ended up on the third one and I twisted my back," Wilson explained to Family and Religion.

In 2010, Wilson was advised to do an MRI scan due to the severity of the pains he was experiencing. He was later told by a specialist that he had to do a surgery.

"After the surgery, I went back to work in November. While getting physiotherapy in May 2011, I was instructed to climb on top of a greenhouse, it was slightly raining and I respectfully advised him that I didn't think it was best in my condition," he explained. However, he complied with the order. Due to the weather patterns, the unstable ladder fell from the greenhouse and, Wilson fell with it.

"I ended up having to redo the surgery on the 1st of November 2011. In January 2013, I got four months' leave. I pleaded with them to allow me to stay in Kingston to further my physiotherapy because, at that time, I was living in Trelawny and the journey from Kingston to Trelawny was unbearable, but all he suggested was that I rent a house in Kingston," Wilson lamented.

In March of 2013, Wilson was called to sit before a medical board, which deemed him permanently disabled.

"I was to be compensated for my injury and I was to receive disability pension ... I was sent on discharge leave on the 5th of August 2013 and it ended on the 19th of October 2013," he said.

Wilson said his efforts to have JDF handle the requisite documents he has submitted have all failed and he is yet to receive a penny.

"Pure run around me a get, every time I go to Up Park Camp is some story. I have even gone to the Ministry of Justice and they say they see no documents submitted for me. I can't afford a lawyer, I feel hopeless right now," the father said.

With two children ages 12 and four years old, respectively, Wilson said it is hard enough knowing he can't even play with them, drop them off at school or provide for them.

He said he feels less than a man, as he has to rely on his girlfriend and family members to help him financially.

"If I had a gun I probably would have committed suicide. Me life mash up and to think how well me serve my country and how the JDF a treat me now makes me sorry that I ever joined. What am !to do now? Day in day out, I just lay in bed when I can no longer sit up, stand or walk," said Wilson.

He noted that JDF needs to do pay him what he is owed. Family and Religion contacted the JDF, but up to press time there was no response.