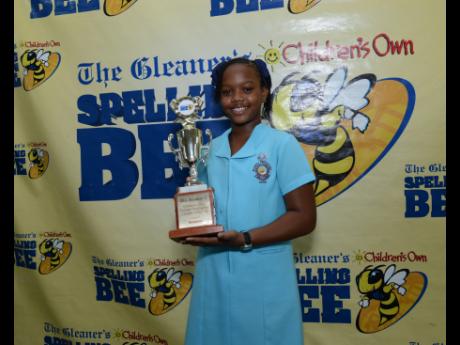 Ian Allen
Assana Thompson with her trophy for winning the Kingston leg of The Gleaner's Children's Own Spelling Bee parish finals.

Quotes: Assana on winning: "I feel amazing! Trust me, what I feel is beyond words. I'm overjoyed."

Assana's coach, Hanif Brown: "It's inexplicable. It's something that I am very, very happy about. I'm just elated. Thanks be to God for the victory, for His will was done, and also thanks to the school, parents and all the spellers and other supporters."

Assana on preparing for parish finals: "I started preparing from July for September, and as we progressed, it got harder, because at first I was studying the book and then we moved on to unseen words. My coach told me to stay humble, not be hype and I followed his instructions."

Hanif Brown on preparing for nationals: "Well, the competition itself is different all in itself. The preparation will have to be different. Things are obviously going to change."

Assana on preparing for nationals: "The words are harder for one, so I'm planning to work harder."

Assana placed third last year and was also champion girl. Seventeen-year-old Hanif Brown, coached by the late Reverend Glen Archer, was parish champion for St Andrew in 2011, and is now carrying on the legacy.

In Hanif Brown's own words: "After winning in 2011, I felt an inclination to go back, and help out Rev Archer, and as a result of that, in 2012, I helped in training champions like Gifton and Tejaun. I was learning a lot. I had no intention, I didn't know that in four or five years I'd be here. I just did it because I knew that he (Rev Archer) was getting older. It's an awesome experience and it's great to be giving back. That's the important thing."