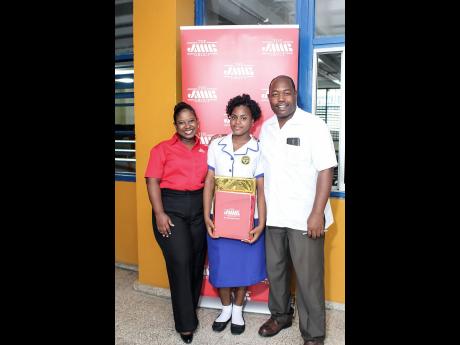 Contributed
JMMB’s manager for client financial education, Michelle Sinclair-Doyley (left), poses with Ja’da Pearson, winner of the JMMB Back to School Facebook competition and Jermaine Loutin, the inspirational teacher who was highlighted by Ja’da in her winning entry for making a difference in her life.

"Teachers affect eternity, no one can tell where their influence stops," the words of Henry Brooks Adams, aptly describes Jermaine Loutin, the jovial and unassuming environmental and agricultural science teacher at JosÈ MartÌ Technical High School.

A past student of the school, Loutin is a passionate teacher who is driven by his students' success. He said although he is from a family of teachers, his life and love for the sciences were influenced by Susan Heavens, his former chemistry teacher. Her genuine interest in his well-being as a student and later colleague has helped to shape the kind of teacher he is today.

"When I came back to serve as a lab technician at JosÈ MartÌ in 2006, Heavens encouraged me to continue pursuing further studies," Loutin said.

Loutin recently completed his Masters in Science Education from the University of the West Indies, Mona and holds a Bachelor of Science in Environmental Science from College of Agricultural Science and Education.

Loutin's love for the field has planted a seed in the life of young Ja'da Pearson, who is now a grade-13 student JosÈ MartÌ High School, pursuing environmental science, agricultural science and entrepreneurship at the CAPE level.

JMMB's recent Back to School Facebook competition, was designed to recognise and acknowledge educators who are positively impacting their students, by inviting entrants to share on Facebook their stories of a teacher who inspired them. Pearson emerged the winner for her story which highlighted Loutin, for engendering her deep love for agricultural and environmental science and inspiring her to succeed.

As a result of Loutin's example and approach to teaching, Pearson was able to overcome her academic challenges and attained eight subjects including distinctions and credits at the CSEC level.

Loutin is described by his students as a teacher who brings humour to his lessons and uses his life experience to motivate others to rise above their challenges. No stranger to challenges he goes the extra mile to ensure that all his students reach their true potential.

Striking a balance as educator and confidante, he not only stirred Pearson's love for the field, but has influenced her career path.

This stalwart educator outlines that his humble beginnings allowed him to be more understanding of some of the challenges his students faces. "My secret ingredient in the classroom is nurturing my students with a healthy dose of love and discipline, while maintaining respect for each student," he said.