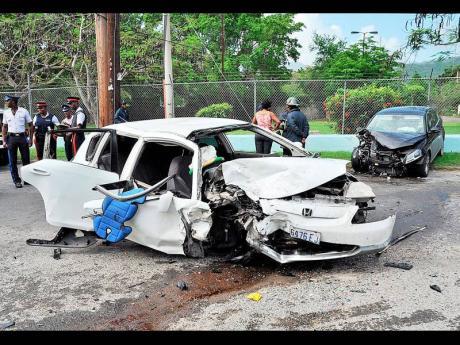 File Photo
The Road Safety Unit says its statistics show that excessive speeding, drivers failing to keep near side/traffic lane and pedestrian error were the main causes of fatal crashes.

The Road Safety Unit in the Ministry of Transport, Works and Housing is again appealing for motorists to take road safety seriously as the number of fatalities continue to climb.

The Unit says up to October 8, 283 persons had been killed from a total of 263 fatal crashes.

It says its statistics show that excessive speeding, drivers failing to keep near side/traffic lane and pedestrian error were the main causes of fatal crashes.

Director in the Unit, Kenute Hare says it is worrying that excessive speeding accounts for the highest number of fatal crashes at 64 per cent.

He says the trend does not seem to be abating despite the Road safety Unit’s best efforts to curb the practice.

He says added to that problem is the fact that drivers are changing lanes without signalling, disobeying traffic lights, and failing to keep left.

Hare says drivers must change their behaviour and think of other road users.

He argues that road fatalities are not just statistics, as these deaths cause a great deal of suffering for the people who have lost a loved one or who are left with a permanent injury.

He says it is projected that road fatalities for the year will be 351 at the current rate.