The Faulknor family celebrates its centenarian 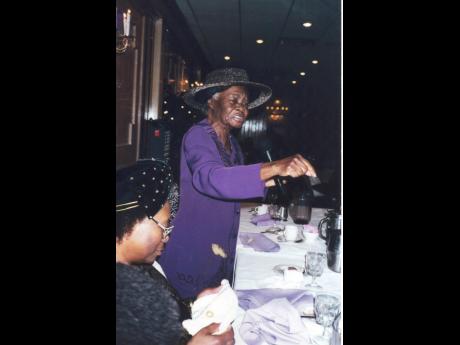 A disciplinarian, an ardent Christian, talented dressmaker, a kind soul, and a dedicated prayer warrior were just a few of the traits attributed to 100-year-old Inez Faulknor by members of her family.

Originally from Red Ground in St Elizabeth, Faulknor, born on October 8, 1915, to James and Susan Brown, was taught the ethics of hard work and independence from an early age and ensured that knowledge was passed on to her four children.

Affectionately known as Miss Nellie or Aunt Nel, Faulknor not only took pride in caring for her biological children but dozens of other children from in and around the community who were needy and/or abandoned by their own families.

"After Mama completed her education at the Braes River All-Age School in St Elizabeth, she learned dressmaking and started making outfits for people from all walks of life. She did that for years as a means of earning an income and taking care of all she needed to," expressed her son, Leroy Faulknor.

Faulknor soon had reason to move to Manchester when she met the love of her life, the late Thomas Faulknor.

"Mama met Pop, got married and began having her children. She has four of us: the first and only girl, Vina, who is 71; then Rohan; and my brother Lloyd and I, who are twins. She added animal rearing and baking to her many skills, and baked items for sale locally and for all the mouths she had to feed. There was always food at the house. She had a lot of adopted children and she had to make sure they were all taken care of."

Leroy fondly remembers a time when they saw a little girl from nowhere sitting on their verandah, only to be told by their mother that she would be staying there for a while

"Yes, we came home one day and saw this little girl sitting on the verandah. Apparently, her parents had abandoned her. Someone found her and said only Ms Nellie would take on this case, and so they brought her straight here. Mama never hesitated. She took her right in."

An active member at the Mayfield Apostolic Church of God for the past 60 years, Faulknor, up to this day, fasts and prays on the first Monday of each month and prays for her church and children at midday every single day.

"You would think at her age, she would be 'missing', but her mind is very intact and, if you let her, she would want to do everything for herself. But one thing is for sure - for over 30 years, on the first Monday of the month, she puts no food to her mouth because she has to fast and pray, and at 12 o'clock everyday, she prays for her children and her church. If you go to visit her, she won't see you until she has prayed."

He added: "I remember once Mama came to look for us in the States and, on her way back, she asked the time. When she heard it was 12 noon, she turned her head to the side while we were in the plane and prayed. So even in the air, Mama never missed that routine," laughed Leroy.

Having lost her husband of over 50 years, Faulknor made no joke of raising her children especially her boys, with dignity and respect.

"She was serious about our Christian upbringing. I remember one Sunday we decided to skull Sunday school and pick oranges, and we got a good scolding. We had to be in church and it followed us, because we are all in the Church today," said son, Lloyd.

He added, "Even in our relationships, she guided us. If she had the power, she would want to tell us who to marry. She had to meet the parents of our partners; their dressing had to be approved and we dared not be too affectionate in her presence or think of sleeping in the same room before marriage. She is a woman of principle."

With 11 grandchildren and five great-grandchildren, Faulknor continues to bask in the love she receives from members of her family daily.