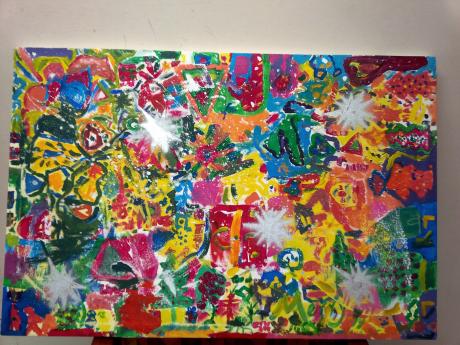 Contributed
One of the five pieces of artwork being auctioned by ScotiaFoundation.

ARTWORK done by children having fun will assist children in need of health care.

Five paintings done by children who attended Mary's House, the temporary space constructed by ScotiaFoundation in Emancipation Park, annually, during the Christmas season, will be sold to the public.

The money raised from the pieces, done by students who visited Mary's House in 2014, will go to the Cornwall Regional Hospital's Paediatric Ward in St James.

"We set up a house in Emancipation Park, for two weeks, in December. It contains the manger with baby Jesus and the animals," explained Joylene Griffiths Irving, executive director of the foundation. "Children under 12 are invited in to create great works of art for Christmas. In the past, they did Christmas cards, but last year we did five pieces on canvas."

The concept of Mary's House is that if Mary had opened her house to children to come see baby Jesus, they would probably make Christmas cards for the baby, producing beautiful works of art.

"While the children are inside, the parents sit on Mary's veranda and talk about old-time Christmas. They share traditions, tell stories, share their memories of Christmas, perform for the kids, and the kids also perform songs, poems, comedy and have fun," said Griffiths Irving.

The children are also encouraged to read aloud story books, which ScotiaFoundation give to them as prizes. Mary's House is run by ScotiaVolunteers. Griffiths Irving said Scotiabank wanted to create an activity for children during the Christmas season that was free.

"We started some years ago when we set up a gingerbread house, and children came in to do art," she said.

"Two years ago, we named it Mary's House. It has been awesome. Each year hundreds of children come to Mary's house."

She noted last year was a rainy Christmas, which may have influenced a reduction in the numbers, but there were still more than 300 in attendance.

"The park managers ask that we do it, for years, as a major attraction in the park," said Griffiths Irving. The plan is to sell the artwork to the highest bidder.

Though the Scotia team is still working out the details, Griffiths Irving confirmed there are plans to have the pieces on show at the ScotiaFinancial centre. Griffiths Irving said persons can contact ScotiaFoundation at 932-0565, 932-0484 and 932-0543 to gain more information about how they can go about purchasing the pieces.