Proud of his ancestor's heritage 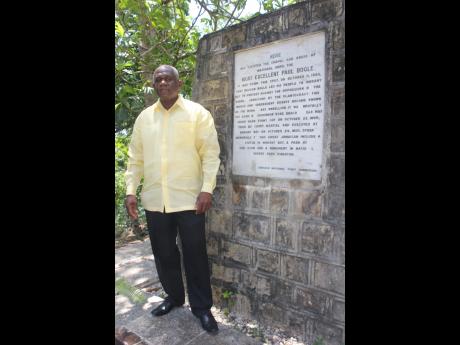 The great-great-grandson of freedom fighter and National Hero Paul Bogle is urging corporate heads to support the legacy of one of Jamaica's most-loved national heroes. As he reflected on one of the most defining moments in the island's struggle for political and economic advancement, Constantine Bogle called on corporate Jamaica to dig deep in order to preserve our history.

"One of the best ways to preserve our ancestors' stories is if corporate business leaders support the fight to keep our history alive through generous donations."

A proud keeper of his relative's memories, the man affectionately known as "Con" launched The Paul Bogle Foundation to help preserve his family's rich legacy.

Con, who owns a mining business, told The Gleaner that Jamaicans can learn from Paul Bogle's legacy.

"There are approximately three million people in Jamaica, and 300,000 are graduates, yet they cannot free us. If we educated all three million, would that free us?' No! You have to bring about spiritual cleansing. this is what will bring the freedom of our nation," Bogle added.

Aiming to put Jamaica on the world's spiritual map, Con explained: "I want to create the lighting of a million candles as a memorial display of the blood sacrificed by the 500 million Africans who were slaughtered due to transatlantic slavery. The idea is to have something everyone can identify with in memory of our ancestors. The lighting of a million candles symbolises each person lighting a candle in memory of their ancestor. My aim is to have a candle vigil, annually, worldwide, including all 54 capitals in Africa, uniting to honour their ancestors."

Dispelling one of the myths about Bogle, Con said, "Paul Bogle was God-fearing, and it was Christ within him which gave him the strength to do what he did for Jamaica. He gave up every earthly possession. This separates him from other heroes. He did not lead the rebellion because he was seeking something for himself. he was already a successful, wealthy, self-made businessman with more than 500 acres of land. He had a horse, which, in today's society would be equivalent to a Benz or BMW. His act was selfless, and I am proud to be identified as his great-great-grandson. Also, most people don't know that Bogle had and still has real family. There is a thinking he just dropped out of the sky."