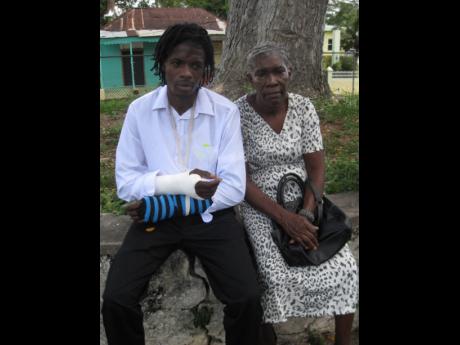 Another family has launched its search in a bid to get justice for their relative, whom they say was beaten by a police officer while in custody. He was beaten to the point where he had to seek medical attention. Wayne McLeod was beaten while he was at the Chapelton police lock-up on Sunday, October 4, after he got into a fight with other inmates in a cell.

"While in the cell, a man told me to take off my shoes and I asked him if is him put on mi shoes on mi foot. By the time I could say that, him box mi, and a suh di fight start," McLeod said.

He said that shortly after the fight began, two officers came and removed him from the cell and placed him in a passageway, and one of them proceeded to beat him with a baton.

"The police attempt to hit mi in mi (right) side and I used my (right) hand to block it. Then he tried to hit me on the other side, and I use the other hand to block it," he said pointing to the areas. He said he was also poked in the chest with the baton by the same officer.

McLeod said he slept in the passageway overnight and was released on bail the Monday morning. With both hands swollen and in pain, he went to a private doctor, who ordered an X-ray report. The results confirmed that both hands had been fractured and he is now wearing casts. To further compound the issue, McLeod, who is a sickle cell patient, is now experiencing severe pain brought on by the injuries as a result of the beating.

McLeod's mother, Iona Douglas, said she is concerned about her son's injuries, knowing his medical history. She is also upset at the manner in which he was treated by the police while he was in their care.

"He cannot work now, so I want to know how he's going to feed his two children and send them to school," she said.

They said the matter was reported to the Independent Commission of Investigations (INDECOM). Senior investigator with INDECOM, Owen Wright, revealed that the office had not yet received the statement, so an investigation into the matter had not yet commenced. Wright said he directed a family member to make a report to the Kingston office but was unable to confirm if this was done.

The Gleaner caught up with the family at the Chapelton Courthouse on Wednesday, where McLeod had a case to answer. That is the same case that got him locked up initially. McLeod said he was picked up in his community of Prospect district in Clarendon by the police after a report was lodged against him for assaulting a neighbour. The complainant did not turn up for court, and so the case was again set for mention on November 11.

Thirty-one-year-old Mario Dean died from an alleged beating he received while in custody at the Barnett Street Police Station in Montego Bay, St James, on Independence Day 2014. He had been taken into custody after he was allegedly held by the police with a ganja spliff. His former cellmates are before the court for his beating death.

Since that incident, there has been at least one other case of prisoners being allegedly badly beaten while in the custody of the police.