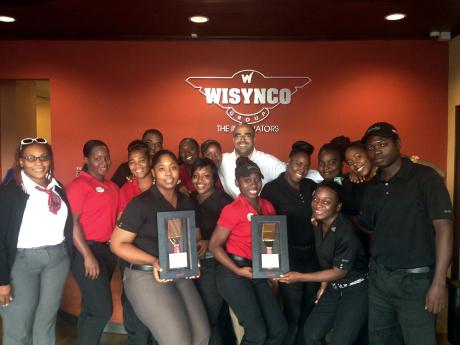 Contributed
The Wisynco team members pose with the awards.

The Wisynco Group, exclusive operators of the Wendy's franchise in Jamaica, was awarded two Golden Grills last week by Wendy's International for the Best Value and Best Customer Service in Latin America and the Caribbean for 2015.

The prestigious awards are given annually by the parent company to top-performing franchisees across the globe. Wisynco was selected from more than 20 active Wendy's operations in the region.

Wisynco purchased the Wendy's business in 2008. Long known for its superior quality food, fresh ingredients and variety of offerings, starting four years ago, the company embarked on a focused strategy to bring its pricing in line with competitors and focus on customer service as a way to distance itself from its competitors. These efforts are beginning to bear fruit as evidenced by the recent awards bestowed upon the company.

Wisynco Foods' CEO, Sean Scott, noted "In 2010, our core cheeseburger combo, served with fries and a 20oz drink, was priced 25 per cent above Burger King's similar combos. We did research that showed that consumers loved our product, but for many of them, it felt out of reach, something they treated themselves to, not an everyday meal option."

In tandem with their core pricing strategy, Wisynco launched in January 2015 a value platform designed for consumers with limited spending power. In addition to its advancement in affordability, the brand was awarded for its scores on customer satisfaction. Wisynco operates a programme called Voice of the Customer that gathers immediate feedback from its guests through online surveys collected on smartphones. Each survey response is sent in real time via email to store management as well as the executive leadership team.

"We bring a hospitality approach to the quick-service industry. Getting your order quickly is no longer sufficient; we have decided to raise the bar. We want our guests to have a "customer epiphany" when they visit us - we want them to have a dining experience unmatched in our industry. This means going the extra mile. It's no longer uncommon in our stores to see a team member assisting an elderly guest to his table or carrying a large order for a single mom with kids to her car. At Wendy's we care about our guests," says Maurice Sloley, head of operations for the brand in Jamaica.

On the heels of these and other improvements, the company known best for its leadership position in beverage manufacturing and food distribution, is investing heavily behind the brand. A new Wendy's will open in Portmore by the end of 2015 in the new Sovereign Village - a shopping complex being developed by the Loshusan family and Progressive Grocers.