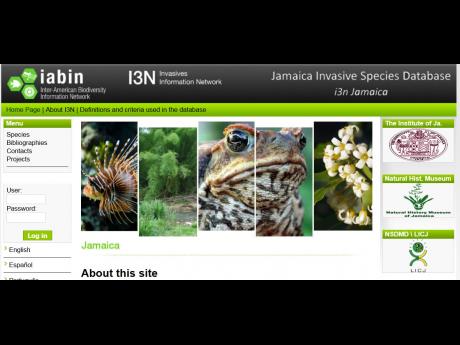 Screenshot from Jamaica Invasive Species Database wedsite
The database, which can be found at: http://apps.licj.org.jm/jamaica-invasives/, is the first comprehensive portal of its kind in the island.

The Government’s capacity to protect the country’s ecosystem against the threat of foreign plants, animals and pathogens has been boosted with the launch of the Jamaica Invasive Species Database (JISD).

The database, which can be found at: http://apps.licj.org.jm/jamaica-invasives/, is the first comprehensive portal of its kind in the island.

Developed under the United Nations Development Programme (UNDP)-funded, National Biodiversity Strategic and Action Plan Project, the database provides crucial information on how alien invasive species are brought into the island, where they are located, the extent of their invasion, among other things.

Speaking at the launch at the Courtleigh Hotel in New Kingston on Wednesday, Deputy Resident Representative of the UNDP, Dr Elsie Laurence-Chounoune, said the database is important for the conservation, protection and sustainable use of Jamaica’s biological resources, particularly since the island is considered one of the most bio-diversified in the Caribbean region.

“(Jamaica) has more than 8,000 recorded species of plants and animals and 3,500 marine species, which is a lot for a small island, so we have to recognise that and preserve and protect it,” she said.

She noted that the database, along with the Jamaica Clearing House Mechanism (CHM), provides information on these species, both endemic and invasive, as well as Jamaica’s protected areas.

The CHM, located at the Natural History Museum, Institute of Jamaica, connects various sources and users of biodiversity information in the island.

Dr Laurence-Chounoune said the country’s economic development is highly dependent on ecosystems and biodiversity, especially at the community level.

“Hence, UNDP is keen to support Jamaica’s efforts on biodiversity management, which is critical in maintaining sustainable livelihoods,” she said.

Senior Research Officer, CHM, Dr Suzanne Davis, said the information networking, coupled with the database, will support the prevention and management of alien invasive species in the island.

The National Biodiversity Strategic and Action Plan Project is being implemented by National Environment and Planning Agency (NEPA) with support from UNDP.

It aims to assist Jamaica in meeting its obligations under the Convention on Biological Diversity and to further the integration of biodiversity management.

Alien invasive species are plants, animals, pathogens and other organisms that are non-native to an ecosystem, and may cause economic or environmental harm or adversely affect human health.

In particular, they impact adversely upon biodiversity, including the decline or elimination of native species through competition, predation, or transmission of pathogens, and the disruption of local ecosystems and ecosystem functions.

They represent a major threat to the unique and vulnerable biodiversity found in Caribbean seas, freshwater and land resources, also threaten the livelihood of people who depend on this biodiversity.