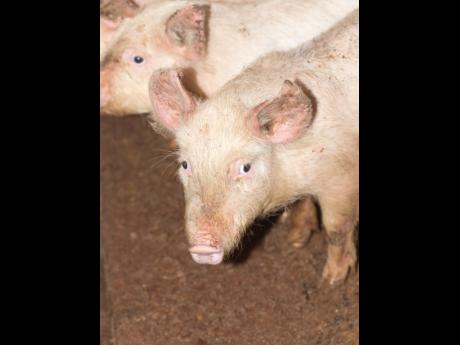 Three men suspected of stealing pigs were arrested after the vehicle they were using to transport the animals was intercepted by the police in St Ann this afternoon.

The men, who are from St Catherine addresses, were reportedly transporting seven pigs in a van when they were stopped by the police in the vicinity of Steer Town about 2:30 p.m.

Inspector Cecil Gordon of the St Anns Bay police said the driver of the white Suzuki Carry Van ran, but was later caught by the police. Upon inspection, seven pigs were found in the vehicle.  The men allegedly said they bought the animals in a 'backdoor' deal.

The three were subsequently taken into custody. The police say the men will be charged as it is believed the animals were stolen from a location between St Anns Bay and Runaway Bay.

The police are appealing to anyone who has had pigs stolen to contact them. The incident comes just weeks after a pig farmer who had lost several animals to thieves complained that the police were not doing enough to stop the criminals.

But Gordon said this afternoon's arrest is evidence that the police are indeed working.

Meanwhile, it is likely that the driver will also be charged for breaching the Road Traffic Act as the police say no record has been found of the registration plates that were attached to the vehicle.