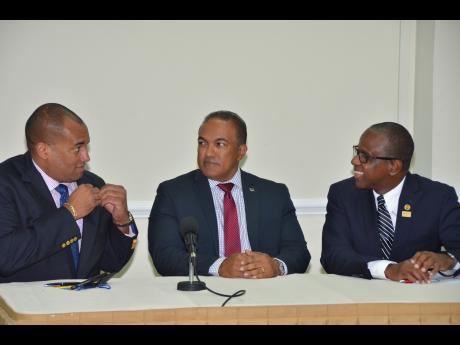 Janet Silvera Photo
From left: Chairman of the Caribbean Tourism Organization (CTO), Richard Sealy; Curacao Minister of Economic Development, Stanley Palm and Executive Director of the CTO, Hugh Riley addressing media at a press conference at the SOTIC2015 at the World Trade Center in Willemstad, Curacao.

The Caribbean Tourism Organization (CTO) is forecasting a five to six per cent growth in tourist arrivals for the region in 2015.

The news comes as the region outpaces all other major regions globally, with record numbers for the first six months of 2015.

"For the first six months the Caribbean welcomed 14.8 million, approximately 800 thousand or 5.8 per cent higher than the corresponding period in 2014, well above the 4.1 per cent recorded globally," Richard Sealy, CTO chairman told journalists at a press conference at the close of the State of the Industry Conference (SOTIC), now on in Willemstad, Curacao.

The Caribbean share of global arrivals stood at 2.8 per cent.

Sealy, supported by executive director of the CTO, Hugh Riley, president of the Caribbean Hotel and Tourist Association (CHTA), Emil Lee and Curacao Minister of Economic Development,  Stanley Palm, said the Dutch Caribbean saw the fastest relative growth across the subregions, with an 8.5 per cent increase in arrivals.

He said all destinations in this sub-region had considerable growth benefiting from increase demand from the US and South American markets.

"Of the other five subregions only the French West Indies recorded a slight decline," he said.

The US continues to be the most important source market, registering 7.3 million visits between January and June representing a 5.3 per cent rise.

"The thawing of the relationship between Cuba and United States resulted in greater number of Americans transiting through other countries like The Bahamas, Jamaica and the Cayman Islands in order to visit Cuba," revealed Sealy.

The Canadian market continues to perform well with 2.1 million visits during the period, however, arrivals from Europe increased only by a modest 1.1 per cent, moving from 2.58 million in 2014 to 2.61 in 2015.

He pointed out that the intra-regional market recorded strong growth of 5.5 per cent, with some 400 thousand visits.

CRUISE
Cruising the Caribbean continued to be in high demand up to the end of June, said the CTO chairman, noting that there were an estimated 13.7 million cruise passenger visits to region in the first six months, an overall three per cent rise over the corresponding period last year.

"The numbers suggest that the prospects for Caribbean tourism are good,  and we remain cautiously optimistic that we will maintain the pace during the second half. Overall, the CTO’s research department projects a 5 to 6 per cent growth this year."