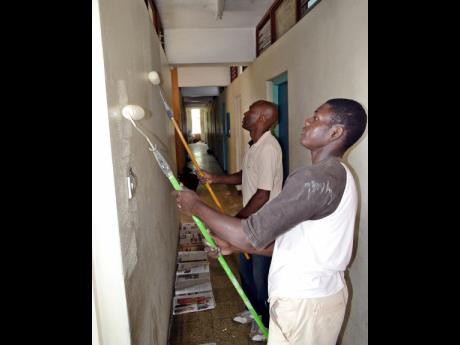 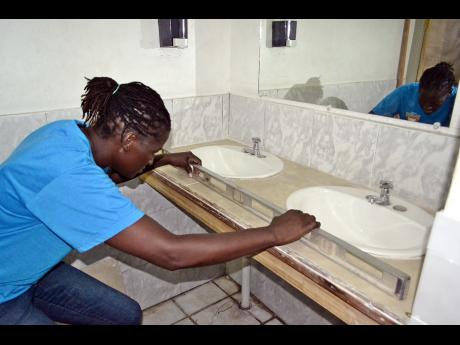 Having tiled a countertop, Racent Bell of North Jamaica Conference ensures that her work is done properly at the Ocho Rios police station.
1
2

Members of the Jamaica Union of Seventh-day Adventists in St Ann turned out in their numbers on Sunday for a workday that formed part of the 125th anniversary celebrations of the union islandwide.

The workday brought into focus undesirable conditions in which some members of the Jamaica Constabulary Force in St Ann are forced to work and live.

Conditions at the living quarters at the St Ann's Bay station, especially, leave much to be desired. Whereas the Adventists' contribution was appreciated and worthwhile, much more needed to be done, Superintendent Wayne Cameron said.

"The St Ann's Bay police station is an old station that really needs some work to be done to it. it is in dire need of attention," Cameron told The Gleaner on Sunday.

"We did similar work at St Ann's Bay, where one set of bathroom facilities that was out of use is now back in use. They have been cleaned and given the necessary fittings. painting, shower curtains were put in, plyboards put in to make sure it is more hospitable, more humane for the police officers as they work."

Work was also done at the Runaway Bay and Brown's Town police stations.