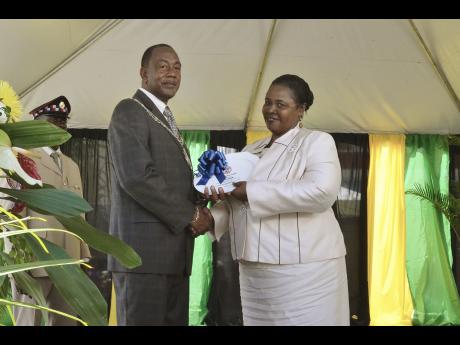 In Western Jamaica, not far from the all-inclusive luxury resorts, are several rural communities starved of basic amenities, and where practices such as poor parenting have long taken hold.

Veteran social worker Gloria Meredith of Montego Bay-based Children of Faith identifies four such communities among those where she works.

However, Meredith doesn't see her work as a lost cause as she believes much can be achieved with systemic community intervention. She argues that connecting with a quarter of the population of a community can be sufficient to enable them to change the behaviour of their peers.

"That's a glorious community," Meredith said of the area around Mount Ward in Hanover where positive behaviour has taken hold.

"You go there, you give them a pack of seeds and see what they can do, and next week they show you all their fruits that they get from the seeds and how much they sell," added Meredith.

According to Meredith, parenting skills is the number-one need in poor communities.

"It's like there's nothing, it doesn't exist. That's an incestuous community, a lot of truancy so you have a lot of teenage mothers in there; a lot of crime among the young men because the way the young boys are treated, they tend to turn to crime very fast. It needs so much," said Meredith of another western Jamaica community which she decided not to name.

"It's not that it doesn't bother people, it does bother people," she said. "The younger ones are crying out for some help to say, listen, we don't want to live like this."

Meredith said poor behaviour and gender bias are passed on from parents to their children, making the need for intervention even more critical.

"The girls are selected over the boys but nothing good is coming from that because they would also be encouraged to sleep with a man to 'earn a money', that is the culture of the communities in which I'm working now."

Children of Faith is an organisation dedicated to assisting children who lost their parents to AIDS, street children or those from dysfunctional families and who are vulnerable to society's "ills and wills".

- The World Bank's Next GENDERation Initiative has been working to help young people challenge gender stereotypes that lead to violent behaviour. It is a partnership between the ministries of education, Youth and Culture and National Security, the Bureau of Women's Affairs, the Planning Institute of Jamaica, the World Bank and the Inter-American Development Bank.

Cops fighting abuse - Police training communities to tackle gender-based and domestic violence
Unleash our potential - youth advocate
Taking the church to the streets - The Street Pastors initiative, born in Jamaica, grown in the United Kingdom, and now back a yard
‘Build back’ to stop crime - Grassroots groups could be the catalysts to end violence