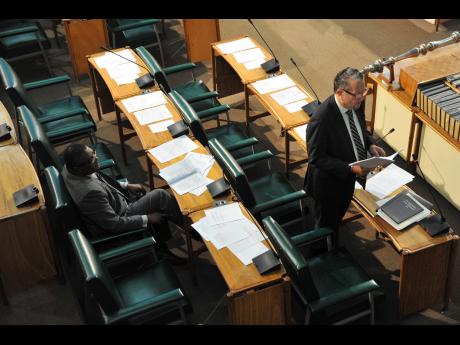 Tom Tavares-Finson (right) was one of two opposition Senators present in Parliament yesterday.

Leader of Opposition Business in the Senate, Tom Tavares-Finson says he will be tabling a motion today in the Upper House, challenging senate president, Floyd Morris' suspension of Marlene Malahoo Forte.

He says Malahoo Forte will make a personal statement to the Senate next week Thursday.

Leader of Opposition Business in the Senate, Tom Tavares-Finson

The Senate president suspended Malahoo Forte on October 23 after she failed to submit to him, a letter he had requested.

The suspension was lifted during the following sitting on October 29. The Opposition members have argued that their colleague was suspended without due process and that the president does not have the power to effect that kind of suspension.

They demanded an apology from the Senate president who refused after which they boycotted sittings for two consecutive days.

Two of the opposition senators returned yesterday to enable the continuation of the debate on bills proposing to replace the Privy Council with the Caribbean Court of Justice as Jamaica's final court of appeal.

That debate will continue this morning.