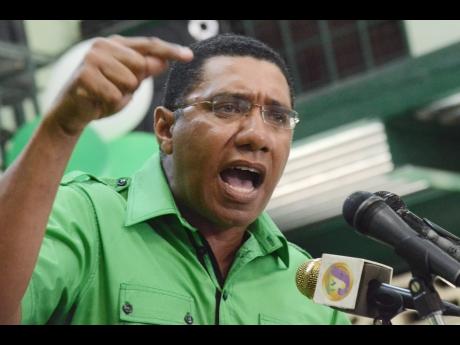 File
Holness ... The Prime Minister has been absent from the interests of Jamaicans, while crime, healthcare, and public accountability are in crisis, with Ministers who take no responsibility for their failures.

Opposition Leader Andrew Holness says Sunday's national broadcast by Prime Minister Portia Simpson Miller cannot make up for what he calls the weak leadership she showed in Parliament in her response to the deaths of 19 babies at the University Hospital of the West Indies and the Cornwall Regional Hospital.

According to the Opposition Leader, Simpson Miller again demonstrated weak leadership on Friday when she "shielded" the embattled health Minister, Dr. Fenton Ferguson from responsibility and accountability, by shifting him to the Labour and Social Security Ministry instead of firing him from the Cabinet.

"Under my leadership, I would never have treated such a tragedy or a public health audit in this way.  The Prime Minister must understand that public trust and confidence is built by positive actions, not just national broadcasts," said Holness.

"It is sad that the Prime Minister only acted after considerable public pressure was brought to bear. It shows that there is no original standard of accountability for this Prime Minister," he said.

"Whole families have been murdered, an entire city suffocated by toxic smoke, a major energy project botched, a US$5 billion Crown and Anchor trick played, and an entire nation crippled by chik-V, yet Prime Minister Portia Simpson Miller did not act.  She fails to hold her political appointees and others accountable for how their decisions put Jamaican lives at risk," Holness insisted.

He said all Jamaicans must be disturbed to know that the health audit report was kept secret for so long.

"The Prime Minister has been absent from the interests of Jamaicans, while crime, healthcare, and public accountability are in crisis, with Ministers who take no responsibility for their failures," said Holness.

He said this amounts to a dereliction of duty by the Prime Minister.