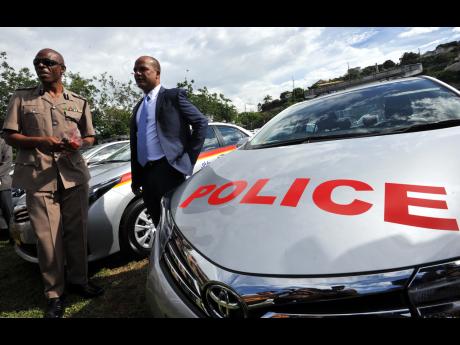 Norman Grindley photo
From left: Commissioner of Police Dr Carl Williams and National Security Minister, Peter Bunting at this mornings handing over of 64 new vehicles to the Jamaica Constabulary Force.

National Security Minister, Peter Bunting, has announced the creation of a security oversight body to hold the government accountable for its management and response to crime and violence across Jamaica.

He made the announcement today as public concerns grow over the 24 per cent increase in murders so far this year when compared with the similar period last year.

He said the oversight body will be called the Rule of Law Working Group of the Partnership for Jamaica.

Bunting says the Rule of Law Working Group will be chaired by Howard Mitchell, who has served in a variety of leadership capacities in the country under both the Jamaica Labour Party and People's National Party administrations.

Membership of the working group will be drawn from the Partnership for Jamaica, which comprises representatives of major organisations and interest groups in the society.

Bunting says the establishment of the oversight body will give citizens a greater voice and influence in the national effort to reduce the unacceptably high levels of crime and violence, especially murders.

The National Security Minister was speaking this morning at the handing over of 64 new vehicles to the Jamaica Constabulary Force.

He says later this week, the Jamaica Defence Force will begin operational deployment of the first set of vehicles from its new Protected Mobility Vehicle Squadron.

Bunting maintained that the unanticipated spike in murders is happening across the world and in places where significant resources had been deployed to fight crime.

But he says this challenges the government to be even more thorough and strategic in operations.

In May, Bunting was criticised for saying increased murders was a bump in the road and suggesting that the increase would not have continued throughout the year.