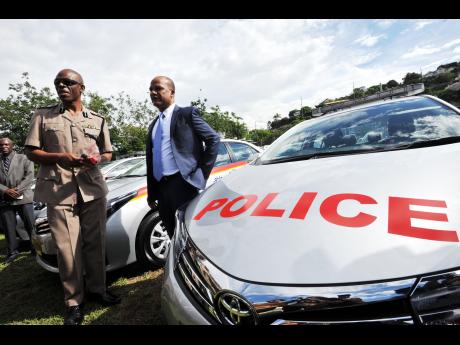 Norman Grindley
Peter Bunting, Minister of National Security (right) and Commissioner of Police, Dr Carl Williams (left) inspect a fleet of new vehicles at the official handing over ceremony of 64 service vehicles that were handed over to the police on Monday.

He says a new unit in the Jamaica Defence Force (JDF) the Protected Mobility Vehicle Squadron, will be deployed later this week to support the police.

"This squadron represents the first reinvestment in that capability for the JDF in decades. Had such a capability been available at the time of the Tivoli operation it would likely have been resolved more quickly and with less injury and loss of life."

Meanwhile, Bunting also announced the creation of a security oversight body to hold the government accountable for its management and response to crime and violence across Jamaica.

He says the oversight body will be called the Rule of Law Working Group of the Partnership for Jamaica.

The Rule of Law Working Group will be chaired by Howard Mitchell, who has served in a variety of leadership capacities under both the Jamaica Labour Party and the People's National Party administrations.

Membership of the working group will be drawn from the Partnership for Jamaica, which comprises representatives of major organisations and interest groups in the society.

The National Security Minister was speaking this morning at the handing over of 64 new vehicles to the Jamaica Constabulary Force.

His announcements came as the police grapple with a 24 per cent increase in murders so far this year when compared with the similar period last year.