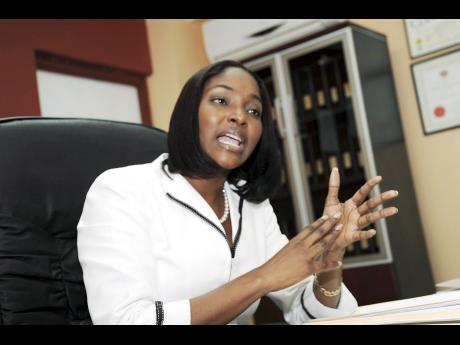 File
Monroe Ellis ... In her report, she raised concern about the financial health of NROCC, the dangers faced in fulfilling its obligations and potential risks to the government.

The Auditor General, Pamela Monroe Ellis is reporting that the National Road Operating and Constructing Company (NROCC) has racked up more than $300 billion in debt in the past six years, posing serious financial threats to the government.

NROCC, established in 2002, is the government company responsible for ensuring the implementation of the Highway 2000 project.

The Auditor General made the pronouncement in her assessment of NROCC's financial statements for the years 2009-2010 to 2014-2015, which was tabled in the House of Representatives this afternoon.

In her report, the auditor general raised concern about the financial health of NROCC, the dangers faced in fulfilling its obligations and potential risks to the government.

Monroe Ellis said the company is heavily indebted after accumulating approximately $332 billion in debt between 2009 and 2015.

She noted that over the review period, the NROCC's outstanding debt increased by more than 80 percent. With a significant portion of the company's loan instruments denominated in US dollars, the Auditor General said the government is highly exposed to financial risks.

In addition, she says government guaranteed loans from the PetroCaribe Development Fund, and the debts to the UK-based engineering consultancy company, Halcrow Group Limited and the Development Bank of Jamaica pose an explicit liability to the government.

Meanwhile, there is no positive forecast for improvement.

The Auditor General says NROCC is accumulating more debt than assets and the sustained negative financial situation signals that the company may face significant troubles in efficiently carrying out its functions.

In addition, the auditor general says NROCC has no revenue because all its income earned from the toll highways is transferred to the owners.

The auditor general says the continued dependence on the government for support threatens Jamaica's fiscal and debt targets.

NROCC is the agency that represents the interest of the government under the concession agreement with the developers of the highway 2000 projects.