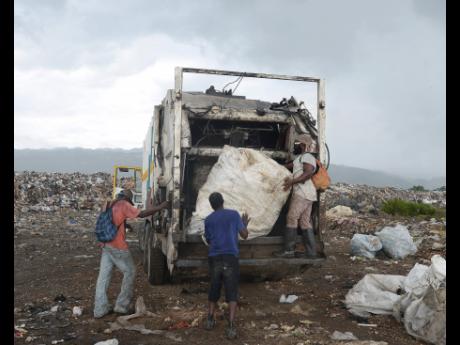 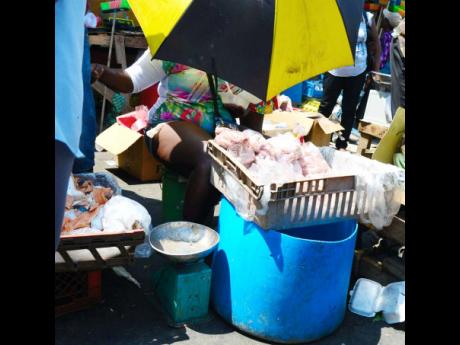 File
In this March photo, vendors in a section of downtown Kingston are seen selling meat dumped at the Riverton City landfill.
1
2

Months after The Sunday Gleaner first reported that meat dumped at the Riverton City landfill was being sold in markets in the Corporate Area, it appears the practice is continuing.

Last week, our news team saw persons flocking trucks dumping discarded meat at the facility, and persons there claimed this remains a major money earner for them.

"Di dump give a lot a people food. Yu can all find food fi eat; yu have a truck come here wid chicken foot and chicken parts and people eat them and feed them hog with it," said one man who makes his living scavenging at the dump.

"You have salt mackerel trucks, salt fish trucks, mi even have piece a salt fish right now weh mi a go home go boil wid two dumpling," added the man, as other persons sorted through heaps of chicken foot and other chicken parts dumped just outside the landfill.

"The truck come up there come throw it weh, so if yu want it yu just go tek it up. People take it up go sell it too," said a man who gave his name as Shorty, as he fanned several files which seemed determined to snatch the meat he had claimed.

"All kind a meat ... but a only chicken mi tek up. Sometimes it spoil, but anytime it spoil mi just look another piece, because a several trips per day come up there," added Shorty.

However, Dennis Chung, head of the board of directors of the National Solid Waste Management Authority, said there are protocols to be followed when dumping things like meat, and anything done outside of that is illegal.

"Anybody who dumps meat just like that is dumping illegally. That is something now, that if we know who is illegally dumping they are going to have a problem," said Chung.

"There is supposed to be a proper disposal process of things like spoil meat, spoil eggs and that sort of things. That is something that if we know about, then our enforcement will have to act," added Chung.