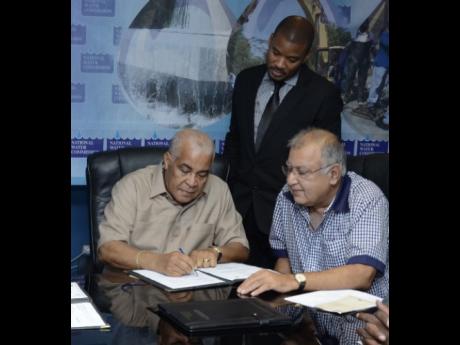 The National Water Commission (NWC) has signed a J$69 million contract with Champion Industrial Equipment and Supplies Limited for construction of the Mason River pipeline in northern Clarendon.

The project is the final phase in the J$202 million upgrading of the water supply system, which will improve service to Mason River, Kellits, Sandy River, Rhoden Hall, Douglas Castle and other areas.

He was speaking at the signing ceremony held at the NWC’s head office in New Kingston on Friday.

The construction works will effectively join all the other components such as intake work, tanks and pump station. Some of these components have already been completed or are significantly advanced.

Pickersgill said a number of persons from the beneficiary communities are being employed in various aspects of the project.

He emphasised the commitment of the ministry to making significant investments in water supply, particularly to rural communities.

He said there were several projects at various stages of development and completion in Clarendon.

These include: the Soursop Turn to Chapelton replacement line; the Mitchell Town Improvement Project; as well as several tank and pump replacement and upgrading works.

“A lot of community involvement was done for this project. A social survey was done to talk to people about where the pipes would be laid. We have been waiting for it,” said Dalley.

Representative of Champion Industrial Equipment and Supplies Limited, Courtney Harford, gave a commitment to completing the project within budget.

Chairman of the NWC, Prakash Vaswani, said the contract signing demonstrated a commitment on the NWC’s part to improving service to Jamaicans, particularly those in rural communities.

Work is scheduled to begin in shortly and is expected to be completed within six months.