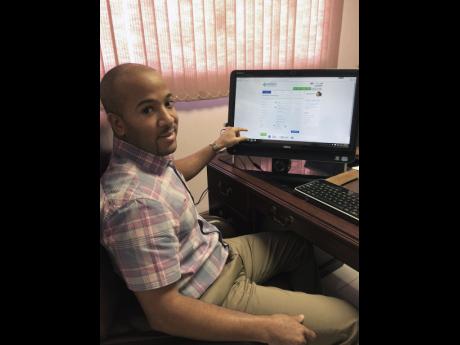 Contributed
Blythe demonstrates the ease with which customers can get rate quotes from various players in the motor insurance industry using the online platform.

Sarifa Insurance Brokers is reporting very positive results since it began offering an online option for customers to get motor insurance.

The company started its beta phase on its anniversary on October 23 and Sarifa president Christopher Blythe is elated with the public's reaction.

"The response was overwhelming, we received hundreds of quotation requests through the online platform and over 100 feedback forms were completed," he said. "Due to the feedback we received from the public in beta, we decided to postpone the launch (originally scheduled for November 13), for a few more weeks to implement improvements in the overall user experience of the system.

However, as of December 23, the site became fully operational and customers are now utilising the system." Blythe admitted he was a little surprised with the initial response as the concept is fairly new in Jamaica.

"We weren't sure how customers would respond to purchasing insurance online, but based on the traction we have received so far we are extremely pleased," he said. "Jamaicans are clearly ready to embrace technology in the purchasing of their motor insurance. Quite a few have told us 'it's about time'."

Chief marketing officer at Sarifa, Makeda Solomon, said the Christmas period does see any let up in volume as clients policy renewal dates arise all year round.

"We are poised, through our innovative new online platform, to make the 2016 insurance buying experience much simpler for Jamaicans islandwide ... even in the diaspora," she said. "As well as giving our loyal customers token gifts to show our appreciation for their custom, we are focusing on making the revolutionary online platform a seasonal gift to all Jamaican policyholders." Looking towards 2016, both Blythe and Solomon felt there were exciting times ahead.

"In 2015, we launched our ecommerce platform for motor insurance which is only the first step in building out our ecommerce model for the insurance market," said Blythe. "In 2016, we will be looking to grow our online presence, expand and grow our ecommerce platform to offer other personal lines of insurance online, improve on our service delivery and create tailor-made packages for our corporate customers." Solomon added that the company would be focusing on another area in 2016, that of health.

"We will also be embarking on a national, online, preventive health and wellness drive in tandem with the expansion of our Life, Health & Wellness Unit," she said. "In addition to the traditional individual and group health plans, pensions and life policies. Sarifa will be proactively promoting the preservation of our most valuable asset, our health."