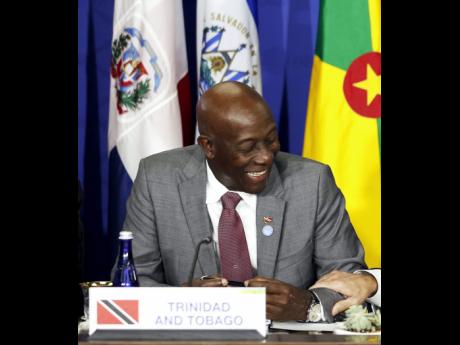 Prime Minister of Trinidad and Tobago Dr Keith Rowley arrives in the island today for a four-day official visit.

The visit comes on the invitation of Prime Minister Andrew Holness, who wants to "further political dialogue on matters of mutual interest to both countries".

Holness extended the invitation to Rowley during their bilateral discussions, held in the margins of the Seventh Summit of Heads of States and Government of States, Countries and Territories of the Association of Caribbean States, in Havana, Cuba, on June 4.

The visit follows ongoing discussions between both governments towards the resolution of long-standing bilateral and regional issues, including the Implementation of the CARICOM Single Market and Economy, and the related Free Movement of Community Nationals and Immigration matters, Trade and Energy Co-operation and Air Transportation.

The prime ministers are also expected to engage on the CARICOM integration process.

Both leaders will discuss the signing of a framework agreement and the establishment of a joint commission, which is currently under negotiation, to provide a structured medium for bilateral discussions and cooperation in areas of mutual interest.

Rowley, who will be accompanied by his wife Sharon, is expected to meet with the chairman of the CARICOM/CARIFORUM Review Commission, pay a courtesy call on the governor general and meet with the leader of the opposition.

He is also scheduled to engage with heads of private-sector bodies and entities on trade and business development.

During his visit, Rowley will address the 22nd Session of the General Assembly of the International Seabed Authority, which is under way at the Jamaica Conference Centre.

He will also meet with the vice-chancellor and senior executives of the University of the West Indies, members of the diaspora, as well as students from Trinidad and Tobago.

In addition, he will have a scheduled event with Trinidadian entrepreneurs in Jamaica.