Kingston Harbour: An atraction in itself 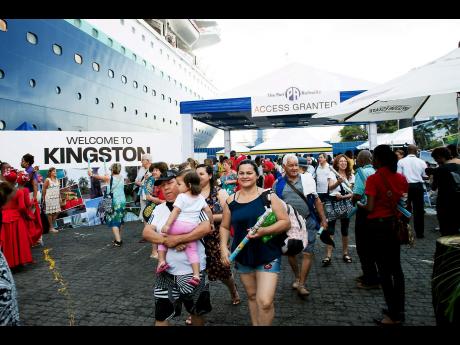 Contributed
Passengers head for the buses taking them on excursions after they disembarked the Pullmantur MS Monarch, docked in Kingston Harbour last Tuesday.

Cruise shipping could return to the Kingston Harbour on a regular basis, Dr Horace Chang, minister without portfolio in the Ministry of Economic Growth and Job Creation, disclosed last Tuesday during the welcome reception aboard the Monarch of the Seas, which docked there. It was the first time in five years the capital city was hosting a cruise ship.

"If we can be assured of regular visits, some adjustments will be done. It doesn't mean we are going to move the port from here, but you'll have to make some adjustments on the sea side to ensure that the two activities can proceed smoothly," Dr Chang told The Gleaner aboard the largest cruise ship ever to dock in Kingston.

He was responding to queries about the potential for regular cruise visits in the wake of a comment from Carmen Rives-Ruis Tapiador, chargÈ d'affaires at the Embassy of Spain, during the welcome reception.

"You don't need to change the port, because it's extremely interesting. I think from a tourist perspective, it's very interesting to land in a cargo port and learn all about how you bring all these containers in and how people work. That's also an attraction by itself," the Spanish diplomat disclosed.

Grantley Stephenson, chief executive officer of Kingston Wharves Limited, said infrastructure changes at the world's seventh-deepest natural harbour to facilitate cargo and cruise shipping on a sustained basis would not be significant and hinted that preparations are under way for such a venture.

"Yes, we would have to do some organisation, it's not significant and it's something we are willing, ready and able to do. Some changes are already taking place and starting next year, we are going to be rebuilding some additional berths, so the two activities could co-exist very easily," he told The Gleaner.

"We'll have 1,700 metres of berth, that's more than a mile. So we have no challenge in accommodating these ships and both of the activities taking place simultaneously. We would have to make some minor adjustments as to how the containers and the cars are laid out, to facilitate the smooth flow of buses and all the traffic associated with the cruise ship, but that is easy," Stephenson further explained.