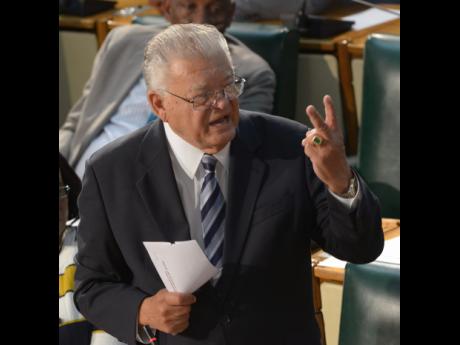 Karl Samuda, minister of industry, commerce, agriculture and fisheries, yesterday used the media launch for Denbigh 2017 to poke fun at himself, extending an invitation to Jamaicans to visit his St Catherine farm which is at the centre of the Mombasa grass scandal

"You know that famous farm in Bog Walk? I will invite anyone who wishes to see what a good-looking farm is like, to come and visit. I believe that if you're the minister of agriculture, you must do something that can make you proud of being a farmer. So anyone wishing to have a peep at any given time, either by passing or by visiting, my wife and I will be happy to entertain you," was how Minister Samuda opened his keynote address.

The minister has come under fire after it was revealed that 15 acres of his property was planted out in Mombasa grass under a project intended to benefit dairy farmers primarily, with beef and sheep and goat farmers also among the beneficiaries. Samuda has denied charges by Dr Dayton Campbell, member of parliament for North West St Ann, that his participation in the Jamaica Dairy Development Board (JDDB) - administered programme is an abuse of authority.

However, Byron Lawrence, acting chief executive officer of the JDDB - has defended his decision to implement the demonstration plot on the minister's farm.

"If it is a demonstration plot it means one thing, it has to be visible so people can see it. So his place is ideal for it because it's right," he told The Gleaner on Tuesday.