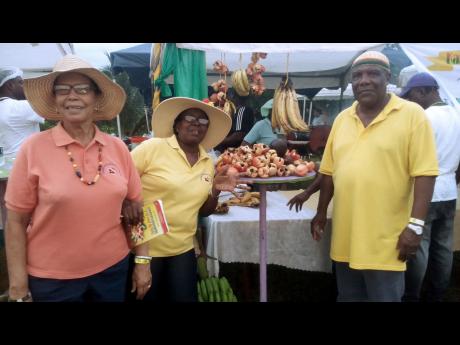 Ruddy Mathison
Chairman of the Linstead Ackee Fest Committee Hopeton Henry (right) with Public Relations Officer Avis Harvey (centre) and Treasurer Stacy Anderson Wilson (left) hanging out at one of the boothes at the festival.

Organisers of the 13th staging of the Linstead Ackee Fest have said it has been a tremendous success.

The festival, which seeks to promote the culinary and economic benefits of ackee, Jamaica's national fruit and one of Linstead's main agricultural produce, was staged on Monday October 16 at the Dinthill High School in Linstead, St Catherine. Ackee is associated with Linstead Market in Jamaican folklore. By-products from the fruit were on full display at most of the 15 stalls established at the festival.

Hopeton Henry, chairman of the organising committee told Rural Xpress that he was satisfied with the level of support from Ewarton, Guys Hill, Redwood, Lluidasvale, Threadways and Linstead, six communities that have continued to support the cause.

"We are moving to expand our support base to include the diaspora by including a Linstead homecoming event next year, where natives of St Catherine will be invited to come home for the festival," Henry disclosed.

"This will definitely boost the economic component of the venture and create the economic empowerment that we envisage, which is one of our main objectives of the festival," he continued.

Henry said another major focus would be an outreach to the business community for more businesses to throw their support behind Ackee Fest.

"I don't think the business community has done enough to support this festival in achieving cultural and economic empowerment of the communities that supported them over the years," Henry remarked. "However, I am pleased with the schools, who, through their home economics departments, were able to create a variety of dishes and drinks from the ackee," he added.

The festival, even though marred by intermittent rainfall, was attended by a huge turnout of supporters who withstood the raindrops to enjoy the cultural package that included performances by local talents and highlighted by the crowning of Miss and Mr Lindstead Ackee Fest.