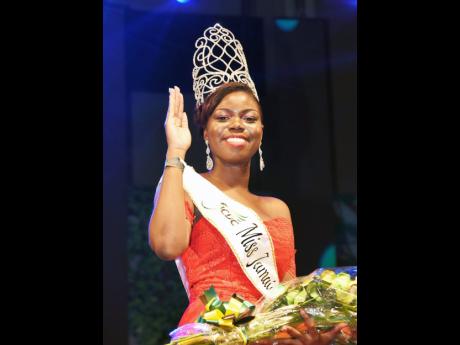 Swaby, who is also Miss St Elizabeth and a graduate of Hampton School in Malvern, St Elizabeth, said it was only fitting that she should contribute to her alma mater via this medium. She indicated that her success can be attributed, in part, to the overwhelming support she received from HOGA.

Swaby created history by becoming the first queen from St Elizabeth to be crowned as the National Queen.

She is herself a past beneficiary of the fund, having been awarded the first HOGA Gloria K. Wesley-gammon Scholarship in 2010. The scholarship is named in honour of a former headmistress who served Hampton for 27 years (1955-1982). The fund was established in 2009, and since its inception, over $10 million have been awarded in scholarships and bursaries to a number of very promising young ladies. The establishment of the fund was in response to a request from outgoing principal Heather Murray for financial support to students, given the deteriorating economic conditions in the parish, following the closure of the Bauxite Alumina Plant in Nain.

In acknowledging Swaby's contribution, chairperson of HOGA's Scholarships and Bursaries Committee, Naomi Holness, noted that it would go towards enriching the Hampton experience of at least one young girl.

Holness lauded Swaby for yet another way of giving back to her alma mater, as she currently serves on the HOGA Sub-Committee and annually shares her journey with the girls during the Awards Luncheon for bursary recipients, as well as the rap session with sixth-formers at Hampton. She added that Swaby is a true example to all 'old girls' that no matter how junior you are in the career ladder, there are many ways in which you can contribute to your alma mater.

n Contributions to the HOGA Education Fund can be deposited to Bank of Nova Scotia HWT, current account no. 487015. Please notify the treasurer of contributions by emailing hogatreasurer@gmail.com.