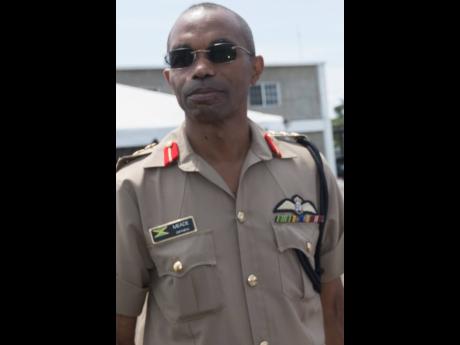 The Montpelier, St James base will become the Jamaica Defence Force’s (JDF) western regional headquarters and training facility when it gets up and running under the leadership of the Second Battalion, Jamaica Regiment.

This was disclosed by Lieutenant General Rocky Meade, chief of defence staff of the JDF, at the official opening of the first of two buildings being constructed at the JDF’s Burke Barracks base, adjacent to the Sangster International Airport in Flankers on Tuesday.

The proposed JDF western regional headquarters will be established on the grounds of the old dairy factory property in Montpelier.

“We are also looking to establish locations in the other parishes (St Elizabeth, Westmoreland, Hanover, and Trelawny) as well,” he added.

According to Meade, the anchoring of the JDF in western Jamaica is part of a move to have some 1,000 troops permanently placed in the region.

He added that the army is hosting a recruitment drive this week (May 16-18) to enlist as many young men and women as possible from western Jamaica.

“I charge the men and women of the Second battalion, Jamaica Regiment, and Delta Company of the Third Battalion, Jamaica National Reserve to serve the people of western Jamaica with the highest level of integrity and professionalism,” said Meade. “Continue to build partnerships within the community groups and with the business community.

“It is only through such partnerships that we can restore safety and stability to revitalise the many communities in western Jamaica in partnership with the JCF (Jamaica Constabulary Force),” the army chief said.