A hotel executive close to Emancipation Park in New Kingston has expressed concern over traffic management and security issues ahead of this evening's Kanye West Pop Up concert.

However, director of marketing and sales for the Pegasus and Courtleigh hotels, Nicola Madden-Greig, is hopeful things will run smoothly and incident free.

"Everybody is concerned about the traffic gridlock that may occur. Hopefully the authorities will put in place measures that are effective and make sure the patrons and all involved are safe," Madden-Greig told The Gleaner.

#SundayServiceJa: Kanye West's 120-member choir spent a part of the lunch hour rehearsing for the American rapper's pop up Sunday Service concert to be held at Emancipation Park in New Kingston this evening at 7 o'clock. pic.twitter.com/UKBdx25ShR

She was, however, upbeat about the event.

"It is great for Kingston to be again put on the map and I hope everyone has fun," she said.

The police have announced traffic restrictions in the vicinity of the park and have announced shuttle service from the Ranny Williams Entertainment Centre. 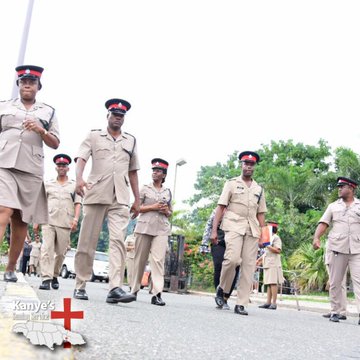 IN PHOTO: Police inspectors arriving at Emancipation Park for the Sunday Service concert

West is reportedly staying at the AC Marriot Hotel not far from the venue.

His 120-member choir earlier rehearsed at the Pegasus hotel across from the park.

A couple hotel workers who spoke with The Gleaner were not concerned about the traffic gridlock that may hamper their commute later today.

"It's a Friday, there will be traffic anyway. Events are held at Emancipation Park all the time " said Jeffroy, a front desk worker at the Pegasus.

Front desk manager at the Courtleigh, Craig Sewell was not overly worried either.

"As long as the roads are not blocked we are alright," he said.

West recently announced his conversion to Christianity and has stirred controversy among African Americans by his support for President Donald Trump and his remark that slavery was a choice.

READ: Kanye's half a dozen controversies

His technical team was conducting sound checks in the early afternoon as a few vendors unloaded their wares to the northern end of the park.

The pop up concert is free and there will be no VIP section.