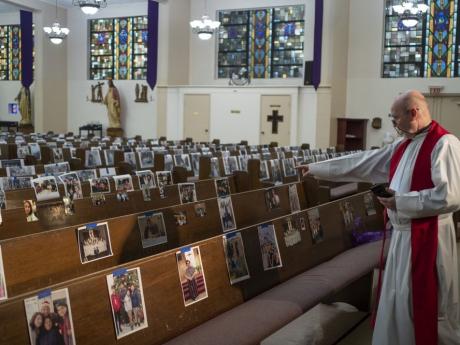 The Rev. Nicolas Sanchez points while talking about the diversity of families who sent their pictures to decorate pews at St. Patrick's Catholic Church in Los Angeles on Friday, April 10, 2020. COVID-19 measures also have changed the way people worship, with churches and synagogues closed and many Passover and Easter services streamed online. The US is nearing Italy with the most number of deaths (AP Photo).

(AP): The US is now close to overtaking Italy for the highest death toll in the world from COVID-19, as Chicago and other cities across the Midwest brace for a potential surge in victims and have moved to snuff out smouldering hot spots of contagion before they erupt.

With the New York metropolitan still deep in crisis, fear has mounted over the spread of the disease into the nation’s heartland. Twenty-four residents of an Indiana nursing home hit by COVID-19 have died. Chicago’s Cook County has set up a temporary morgue that can take more than 2,000 bodies. And Chicago Mayor Lori Lightfoot has been going around telling groups of people to “break it up.”

The US now has, by far, the largest number of confirmed cases in the world, with more than half a million cases of COVID-19.

The death toll today reached more than 18,850, while Italy reported that the number of dead there had climbed to nearly 19,500.

Over the past week, the number of new deaths each day has been about three times higher on average in the US than in Italy. Deaths have risen by more than 9,000 for the week in the US compared with fewer than 3,000 in Italy.

About half the deaths in the United States were in the New York metropolitan area, where hospitalisations are slowing down and other indicators suggest social distancing is “flattening the curve” of infections.

Roadblocks to curb vacationing in Europe

Around the world, meanwhile, European countries used roadblocks, drones, helicopters, mounted patrols and the threat of fines to keep people from travelling over Easter weekend.

And with infections levelling off in Italy, Spain and other places on the Continent, governments took tentative steps toward loosening the weeks-long shutdowns of much of public life.

“Don’t do silly things,” said Domenico Arcuri, Italy’s special commissioner for the virus emergency. “Don’t go out, continue to behave responsibly as you have done until today, use your head and your sense of responsibility.”

Italian authorities set up roadblocks on main thoroughfares in and out of Milan and along highway exits to discourage people from going on holiday trips. British police kept a close watch on gatherings in parks and at the seaside on what was set to be the hottest day of the year. France deployed some 160,000 police, including officers on horseback who patrolled beaches and parks.

“It’s useless to pack your bags for a vacation,” the Paris police headquarters tweeted.