US cities brace for increasing unrest, call in National Guard 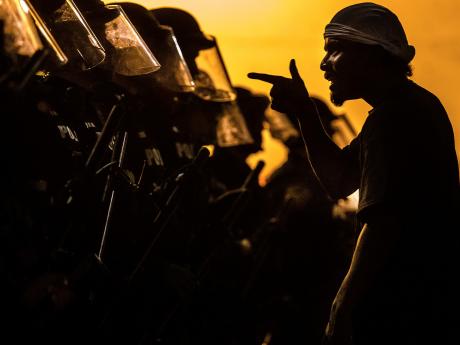 A protester vents at a line of Tucson police officers in riot gear at Cushing Street and Church Avenue earlier today in Tucson. The protest in Tucson was similar to those in numerous cities across the United States following George Floyd's death while in the custody of the Minneapolis Police on Memorial Day in Minnesota (AP photo).

(AP) — Protesters set police cars ablaze, smashed the windows businesses and skirmished with baton-wielding officers in streets from Atlanta to Los Angeles, as anger over George Floyd’s death spread across the country.

Authorities were bracing for more violence today, with some calling in the National Guard to beef up overwhelmed forces.

In Minneapolis, the city where Floyd died on Monday after a white police officer pressed a knee into his neck and kept it there for more than eight minutes, Minnesota Gov. Tim Walz fully mobilised the state’s National Guard and promised a massive show of force to help quell unrest that has grown increasingly destructive.

“The situation in Minneapolis is no longer in any way about the murder of George Floyd,” Walz said.

“It is about attacking civil society, instilling fear and disrupting our great cities.”

On Friday alone, more than two dozen cities — from New York to Oakland, California; from Atlanta to Portland, Oregon — experienced protests, many peaceful, but some of which turned violent. Many protesters spoke of frustration that Floyd’s death was one more in a litany. It comes in the wake of the killing in Georgia of Ahmaud Arbery, who was shot after being pursued by two white men while running in their neighbourhood, and in the middle of the coronavirus pandemic that has thrown millions out of work, killed more than 100,000 people in the US and disproportionately affected black people.

President did little to quell tempers

President Donald Trump did little to tamp down the anger, firing off a series of tweets ridiculing people who protested outside the White House and warning that if protesters breached the fence, “they would ... have been greeted with the most vicious dogs, and most ominous weapons, I have ever seen.”

Minnesota has steadily increased the number of National Guardsmen it says it needs to contain the unrest, and has now called up 1,700. The arrest and charging of the officer who held his knee to Floyd's neck on Friday appears to have provided little balm.

The Guard was also on standby in the District of Columbia. Some protesters tried to push through barriers set up by the US Secret Service along Pennsylvania Avenue, and threw bottles and other objects at officers wearing riot gear, who responded with pepper spray.

“I just feel like he’s just one of many names that we’ve had to create hashtags and T-shirts and campaigns for and I feel like nothing has changed," district resident Abe Neri said of Floyd. "And so that’s why I’m out here. Yeah, when you say nothing you’re taking the side of the oppressor.”
A person was killed in downtown Detroit just before midnight after someone in an SUV fired shots into a crowd of protesters near the Greektown entertainment district, police said. In Portland, Oregon, protesters broke into police headquarters and authorities said they lit a fire inside. In Virginia's capital, a police cruiser was set on fire outside Richmond police headquarters, and a city transit spokeswoman said a bus set ablaze was “a total loss,” news outlets reported.

Georgia Gov. Brian Kemp tweeted that up to 500 members of the Guard would deploy immediately “to protect people & property in Atlanta.” He said he acted at the request of Atlanta Mayor Keisha Lance Bottoms, who earlier appealed in vain for calm.

In scenes both peaceful and violent across the nation, thousands of protesters chanted “No justice, no peace” and “Say his name. George Floyd.” They hoisted signs reading: “He said I can’t breathe. Justice for George.”