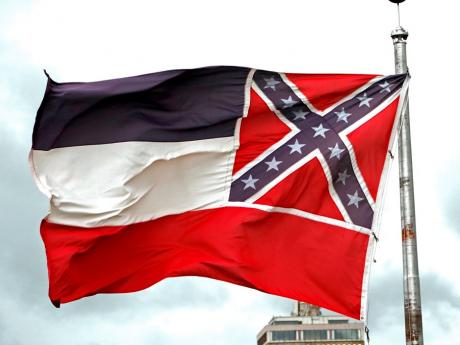 A Mississippi state flag flies outside the Capitol in Jackson, Missouri on Thursday. Athletic coaches and their staff from the state's public universities held a joint news conference and called for a change in the Mississippi state flag. Additionally several head coaches met with both the lieutenant governor and Speaker Philip Gunn, as well as their lawmakers, to lobby for the change. The current flag has in the canton portion of the banner the design of the Civil War-era Confederate battle flag, that has been the centre of a long-simmering debate about its removal or replacement (AP Photo).

(AP): Mississippi lawmakers could vote this weekend to remove the Confederate battle emblem from the state flag, a symbol that has come under intensifying criticism in recent weeks amid nationwide protests against racial injustice.

People for and against the current flag were gathering at the state Capitol this morning as lawmakers arrived.

Karen Holt of Edwards, Mississippi, was among several people asking lawmakers to adopt a new banner with a magnolia, which is both the state tree and the state flower, and with stars to represent Mississippi as the 20th state. She said it would represent “joy of being a citizen of the United States,” unlike the current flag.

“We don't want anything flying over them, lofty, exalting itself, that grabs onto a deadly past,” Holt said.

Dan Hartness of Ellisville, Mississippi, walked outside the Capitol carrying a pole that had both the American flag and the current Mississippi flag. He said the current state flag pays tribute to those who fought in the Civil War.

“Being a veteran, that's important to me — that you remember these guys that fought in battle, whether they're on the right side or the wrong side,” Hartness said.

Mississippi has the last state flag  that includes the Confederate battle emblem — a red field topped by a blue X with 13 white stars.

Flag could be put to state wide vote

Lawmakers could adopt a new Mississippi flag without Confederate imagery. Or they could kick the volatile issue to a state wide election, giving voters choices that might or might not include the current banner.

The battle emblem has been in the upper-left corner of the Mississippi flag since 1894. White supremacists in the Legislature put it there during backlash to the political power that African Americans gained after the Civil War.

The Mississippi Supreme Court ruled in 2000 that the flag lacked official status. State laws were updated in 1906, and portions dealing with the flag were not carried forward. Legislators set a flag election in 2001, and voters kept the rebel-themed design.

However, the flag has remained divisive in a state with a 38 per cent Black population. All of the state’s public universities and several cities and counties have stopped flying it because of the Confederate symbol that many see as racist.

Influential business, religious, education and sports groups are calling on Mississippi to drop the Confederate symbol. Flag supporters say the banner should be left alone or put on the state wide ballot for voters to decide its fate.

The state’s annual legislative session is almost over, and it takes a two-thirds majority of the House and Senate to consider a bill after the normal deadlines have passed. Leaders have been working to secure those majorities. Republican Gov. Tate Reeves said Wednesday that he will not veto a bill if legislators pass one.