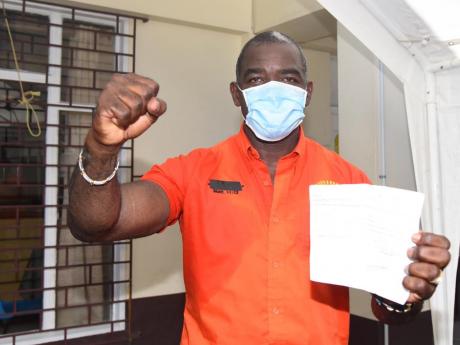 It was an affair of orange balloons and brooms in Portland Eastern as People’s National Party first-timer Purcell Jackson was nominated.

Jackson had a throng of supporters in a motorcade who blasted dub plates and campaign songs from their speakers.

As he exited the nomination centre, they released the balloons into the air and cheered on Jackson, intensifying the already high energy.

The scene was quite the opposite to the nomination of incumbent Ann-Marie Vaz, who encouraged her supporters to stay home in light of the COVID-19 pandemic.

Jackson replaced Damion Crawford who left the constituency months after he lost the April 4, 2019 by-election.

Jackson is confident that he can secure the votes of the people in the September 3 polls to unseat Vaz.

“The only thing for others to prevail is for good men to keep their mouths shut and so I thought it was time to step into the ring and for a man of God to speak up for the people,” the bishop said.

Sixty-three-year-old Elaine Thompson was among the hundreds of Jackson backers.

“From mi a 18 mi a vote and I see dem do things for me. Dem fix my road, dem help one of my daughter to go college so I’m sticking with the PNP party,” Thompson said.

Another female supporter, who declined to give her name, said the constituency is in need of a political representative who is also a man of the cloth.

“Him will do better because dis country needs Jesus fi heal di land and a di best man fi run it,” the 67-year-old said, adding that she is a Christian.

“Him a first-time candidate suh we nuh know what him can do still but we jus a give him di try still,” shared a male supporter.