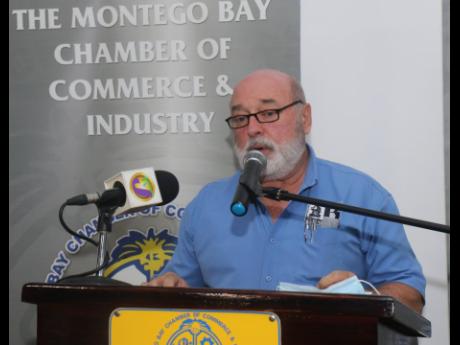 Businessman Mark Kerr-Jarrett, who serves as a director and head of the crime portfolio at the Montego Bay Chamber of Commerce and Industry (MBCCI), wants persons involved in the shipping of illegal guns and ammunition into the island to be identified, named, and prosecuted.

He was speaking against the background of an incident earlier this week in which the police intercepted a barrel at the Montego Bay wharf, which contained six rifles, 13 handguns, and 470 rounds of assorted ammunition. The barrel was addressed to a woman in Falmouth, Trelawny.

“We look forward to some names being attached to this (shipment) and just penalties awarded to them,” said Kerr-Jarrett, who was taking questions from the media at a press conference hosted by the MBCCI on Wednesday.

The businessman, who has been one of Montego Bay’s foremost business leaders for over three decades, praised the security forces for intercepting the barrel before its illicit contents could reach the gangsters in the criminal underworld.

“It’s frightening because those weapons are only used for killing people and waging war,” he noted, arguing that with so many guns in the hands of violence-producers, law-abiding citizens are basically at the mercy of their rampant criminality.

“Are we as a country going to wage war on ourselves and allow the revolting and predatory elements in the society to continue to rob us of our potential?” asked Kerr-Jarrett, who is also a renowned land developer.

In light of the most recent gun find, among others in recent times, the businessman is calling for greater partnership between the police and law-abiding citizens so that critical information on criminal activities, to include those shipping illegal guns into the island, can be shared and the requisite actions taken to identify and apprehend them.

“I encourage us as citizens to participate in the information gathering and surrendering process,” said Kerr-Jarrett, in his appeal to citizens to join the fight to stamp out lawlessness.

Based on information garnered about this week’s busted shipment of weapons, the police are now working with their US counterparts to identify the sender of the barrel, which was shipped from Florida. They have also launched a search locally to locate the woman to whom the barrel was shipped.

Within recent years, the Montego Bay port has been targeted by criminals seeking to import illegal guns into the island. Three years ago, two barrels containing 119 guns and more than 200 rounds of ammunition, which were destined for the Montego Bay port, were intercepted by US Border Patrol at the Miami International Airport.