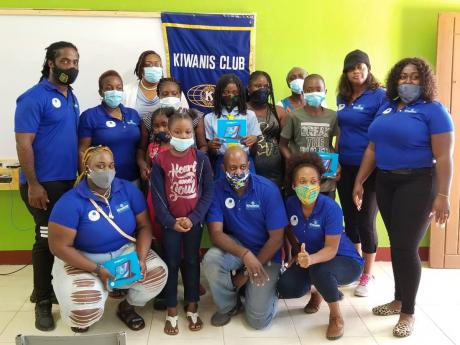 Contributed
Members of the Kiwanis Club of Charlton-Alexandria with students who benefited from the club’s tablet-donation initiative. 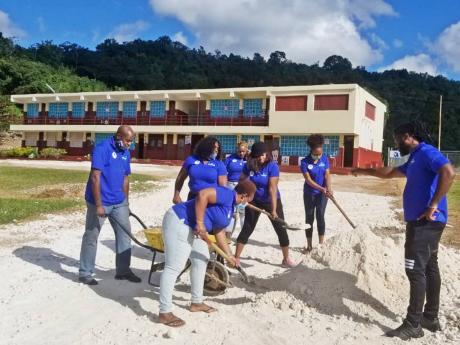 Contributed
Members of the Kiwanis Club of Charlton-Alexandria spreading marl on the driveway at the Aboukir Primary School before it was paved.
1
2

The Kiwanis Club of Charlton-Alexandria in St Ann continued its service to children recently with the donation of six tablets, with SIM cards, to students from several schools across the parish.

Club members also put in some physical labour by helping to spread marl at the Aboukir Primary School in a project to build a multipurpose court and pave the driveway at the school.

In an effort to impact as many schools as they could, the tablets were presented to one student from each of six schools, namely Watt Town All-Age, Aboukir Primary, Muirhouse Primary and Junior High, Charlton Primary, Bethany Primary, and Servite Primary.

The tablets were raised through donations from several sponsors who responded to the club’s request for assistance with the project. Parents of the beneficiaries, as also principals from schools affected, expressed delight at the contribution of the Kiwanians.

Club president Rohan Brown told The Gleaner that members were delighted to have been given the chance to assist the students.

“These tablets will help them in accessing online learning. I want to say kudos to our sponsors as we could not have done this without them,” Brown said.

“This will, by no means, satisfy the needs of all the students in the respective schools. However, it will go a far way in these children accessing their online studies and continuing their education.”

In the meantime, Brown said it was an easy decision to assist with the paving of the school’s driveway and multipurpose court at Aboukir Primary.

“This again was a far-reaching project which will impact the lives of the students and, indeed, the wider community for years to come. That is what Kiwanis is all about, serving the children of the world, one at a time,” Brown said.