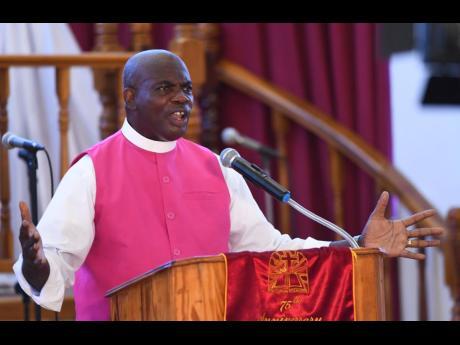 Religious interest group Jamaica CAUSE has described as atrocious, disgraceful and alarming, a proposal that minors should be allowed to terminate pregnancies without parental consent and says such a move should be rejected by all well-thinking Jamaicans.

Bishop Dr Alvin Bailey,  said such a call could be translated to mean that these persons of high intelligence and outstanding academic achievements are spiritually deprived in advocating abortion as a method of contraceptive.

Bailey said CAPRI’S suggestion has exposed the moral and ethical crisis that now exists in Jamaica.
“This is an abomination and is contrary to Christian values.  To condemn to death our unborn children for the expediency of socio-economic benefits is contemporary barbarism,” he noted.

The chairman of Jamaica CAUSE said the Christian church considers the  CAPRI report - and its insistent support of the legalisation of abortion - to be  against all Biblical and moral values, primarily because it disregards the sanctity of human lives.

“A few misguided individuals, in spite of indisputable Biblical references, choose to blaspheme the Word of God for popularity and recognition,” he noted. However, he said the Christian Church and a general religious community will never sanction this middle-passage type legislation to destroy human lives for socio-economic benefit in a referendum.

Bailey pointed out that CAPRI’s position on the matter endorses women mutilating their bodies to kill their unborn children, while risking their lives, under the guise that they were  in charge of their own bodies and were safeguarding their well being.

“Let’s face the harsh reality.  The views of the pro-abortionists have less to do with liberating women and allowing them the freedom to choose.  It is about advancing the global agenda of powerful and influential international agencies, by paying the price in order to gain access to funding for Jamaica.

“It is about a quick fix for the shortage of urgently needed social systems which are put on the back burner because of growing economic challenges.   It is about increasing the wealth of doctors who charge large sums for their services. It is about the ignorance of the dangers and possible death of the pregnant mother, as well as the permanent emotional and psychological damage abortion does to the woman who commits the act and her family,” Bailey noted.

He said Jamaica’s legacy cannot be defined by the planned execution of our unborn children as a means of population control in support of pre-determined social construct, political expediency or self-centred ideological objectives of elected individuals and other influencers.

“In the final analysis Jamaicans, under it present leadership, must decisively  define its own sovereign moral and ethical identity, then motivate our people, our politics and our socio-economic leaders to  support that sovereign purpose,” said Bailey.