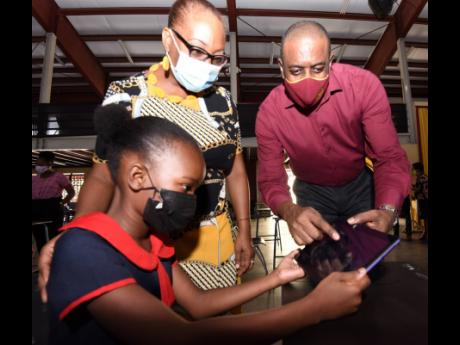 Ian Allen/Photographer
Tasheena Evans (left), grade four student at Allman Town Primary School, pays keen attention to instructions on how to operate a tablet by Courtney Wynter (right), chairman of the Wolmer’s board, while Latoya Nesbitt (centre), principal of Allman Town Primary, on Tuesday. The occasion was a handover ceremony of laptops and tablets by Wolmer’s to assist two community primary schools with technology devices from their telethon proceeds. The Wolmer’s Trust raised funds from a COVID-19 relief telethon in partnership with its local and overseas alumni associations in October 2020.

Parents and administrators expressed gratitude on Tuesday as students of five Kingston schools were gifted computers that will help close the deficit on online learning as the coronavirus pandemic drags on.

Shorna Hunter, mother of Allman Town Primary School grade four student, Tasheena Evans, was effusive with praise as her daughter was presented with a tablet.

Her daughter has missed out on the last month of online classes as her tablet began malfunctioning.

“It’s a big blessing to us because what I couldn’t do for her, someone has stretched out in order to meet our needs,” Hunter said.

The Wolmer’s Trust, in partnership with its local and overseas alumni associations, staged a COVID-19 relief telethon last October with the aim of acquiring much-needed laptops and tablets for the schools.

Approximately US$60,000 was raised and net proceeds have so far purchased more than 100 laptops, tablets, and technology equipment.

“Thank you for putting a dent into the needs that we have,” she said, adding that 50 per cent of her students are still without devices.

The coordinator explained that acquiring tablets and other devices for children has been challenging, especially because their students are primarily from poor, inner-city communities.

“This will go a very long way in helping the children to get the education they need,” Dixon said.

Meanwhile, principal of Wolmer’s Boys’ School, Dwight Pennycooke, said the institution has been on a drive since March 2020 to provide assistance to as many of its students as possible.

“Those schools were targeted because we have a historical relationship, by virtue of proximity, and so we wanted to just extend a hand because it is more blessed to give than to receive,” said Pennycooke.

Principals of Wolmer’s Girls’, Colleen Montague, and Wolmer’s Preparatory, Norma McNeil, both expressed gratitude for the efforts in organising the telethon and for choosing their schools as beneficiaries.

More than 200 of Wolmer’s Prep’s 325 student population are still in need of tablets.

“We will make good use of it. We want to thank them all for thinking of uss,” McNeil said.