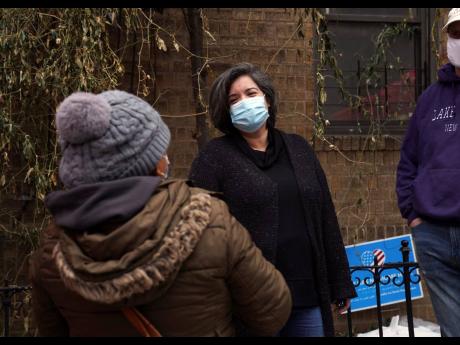 AP
Sofia Moncayo, who leads a food distribution programme through Mosaic West Queens Church in the Sunnyside neighbourhood of the Queens borough of New York speaks with a donation recipient, on Monday. Moncayo and dozens of volunteers distribute more than 1,000 boxes of food to families twice a week.

While dozens of New Yorkers lined up outside in the rain, shopping carts at the ready as they waited for free food, Sofia Moncayo led her team in prayer.

“We’re super grateful for these people here. In Jesus’ name we pray,” she said, and the group of women around her clapped, cheered and replied: “Amen”. “Now,” she said, “let’s get to work”.

By then, they had worked almost non-stop for hours. They picked up heavy boxes, separated thousands of items and removed snow from the curb. They were cold, wet and tired. No one would pay them and they didn’t care. They were just happy to be there for someone else that day.

During the coronavirus pandemic, Moncayo has led the food distribution programme through Mosaic West Queens Church in the Sunnyside neighbourhood. The initiative began in March; Moncayo took charge a month later, as it expanded to serve hundreds of people.

Since then, Moncayo has had her own struggles. She was furloughed from her job at a construction company and remains unemployed. And she also owes five months of rent for the martial arts studio that she owns with her husband in the neighbourhood.

But she has continued to lead fundraisers and coordinate dozens of volunteers who distribute more than 1,000 boxes of food to families twice a week.

“I think helping others has to do something to your brain chemically because if we had not being doing everything that we’re doing, I think this would have been a much scarier time,” she said. “Being able to dig in and help others, it really gives you perspective and helps you believe that you’re going to be OK too.”

Most of the food is donated by a neighbourhood restaurant and other sources. There’s also been help from the Farmers to Families Food Box Programme overseen by the US Department of Agriculture.

Moncayo, who was born in Colombia, was moved to volunteer by her Christian faith by memories of the food insecurity she faced growing up in New York. She recalled how she would join her family in lines to pick up bread and cheese from pantries and how sometimes she felt shame.

“One of the things that we wanted to make sure is that we don’t look at people on the pantry line as people that need food, and really focus on, ‘Hey, these are our neighbours.’”

Sunnyside resident Carol Sullivan lost her stage manager job when Broadway theatres closed because of the virus. She was hesitant at first about receiving food from a pantry, but she said that Moncayo and the other volunteers made her feel welcome.

“If you have a dollar, you have to stretch it in so many places. Having them has made the choice less stressful.”