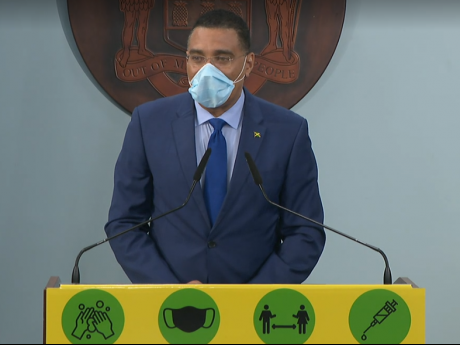 Prime Minister Andrew Holness addressing a media briefing now taking place from Jamaica House to update the country on the nation's response to the COVID-19 upsurge and other matters.

New and extended measures have been announced by Prime Minister Andrew Holness under the Disaster Risk Managements Act to help contain the continued spread of COVID-19, as the country battles an upsurge in the numbers of people now affected by the disease.

There are now more than 9,000 active cases of the respiratory illness and 422 deaths. The infection rate is now at 1.3 per cent. COVID-19 facilities at several hospitals are at capacity or nearly full, with 252 people in hospital for treatment.

Among the orders announced during a hybrid media briefing from Jamaica House, this afternoon, is a new strict work-from-home order for public sector employees, starting this Thursday, March 4.

Permanent secretaries and heads of agencies and departments are to determine which staff members will work from home.

As for the private sector, businesses are being encouraged to evaluate their operations and, where feasible, allow their employees to work from home.

However, the prime minister said an order will be issued to mandate private businesses to make arrangements for persons with comorbidities to work from home.

Government entities are also barred from holding any in-person event for the next three weeks. These include handovers, groundbreakings and opening ceremonies, until after March 22.

The prime minister also said all persons coming into the country, including Jamaicans travelling from overseas, will now have to present a negative COVID-19 test before being allowed to enter. The test must be done no more than 72 hours prior to arriving and presented at check-in.

The current nightly curfews from 8:00 p.m. to 5:00 a.m. have been extended until March 23 and the limit of no more than 10 people gathering in public spaces remains in place until March 22.

The stay-at-home order has been expanded to persons 60 years and older. They are allowed out once per day "for the necessities of life." The order will remain in effect until March 22.

Additionally, there is to be a ban on funerals and burials for a period. No burial orders will be issued by public health officials from March 8 to March 22, the prime minister stated. Those already planned and permitted for up to March 8 will be allowed.

"We agonised over this decision and have consulted from a public health point of view. It is almost impossible to allow this and bring the infection rate down at the same time," he said. The infection rate is currently at 1.3 per cent, which, though not the highest the country has experienced so far during the pandemic, is dangerous at the current numbers of infection the chief medical officer, Dr Jacquiline Bisasor Mckenzie said during the presser.

Holness also announced that places of worship will have to resume hosting hybrid services, catering to majority of congregants using online services. Only a maximum of 10 persons will be allowed to worship in person, as of tomorrow, March 1.

Weddings will be permitted to continue, but only 25 persons, including the bride, groom, pastor and two witnesses will be allowed.

Public beaches and rivers will be closed until March 22, while zoos, parks, attractions and gyms, as well as bars, must close by 6:00 p.m. daily until March 22.

At schools, only students sitting exit exams will be allowed on compound for face-to-face classes.