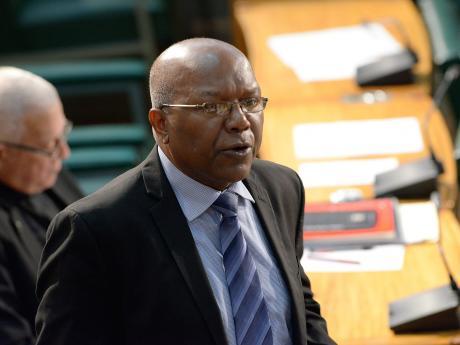 The state of affairs at the Cornwall Regional Hospital in St James, came under the microscope today at a sitting of the Finance Committee of Parliament.

Bed space is running out at the facility, located in St James, as the operating area has been limited due to the abandonment of certain sections of the main building which was declared sick four years ago.

Recently, The Gleaner published a heart-tugging photograph, showing how elderly patients sat on benches as they were administered oxygen and intravenous therapy.

At the sitting, under question from Opposition spokesperson on Health, Dr Morais Guy, Health Minister Dr Christopher Tufton disclosed that some $784 million have been spent on rehabilitation and the continuing of services while the works are being undertaken.

That amount was a part of the $1.15 billion budgeted for works on the hospital last fiscal year.

“Cornwall, as an institution providing health care remains intact. The doctors, the nurses, the lab services, cancer treatment, the dialysis … all of those are there. I am very proud of the team and the workers there who have really maintained that position for the interest of the people in the area,” Tufton stated.

He was, however, unable to say how much money has been spent on Cornwall Regional Hospital’s rehabilitation since 2017 when an air quality report forced the authorities to shutter the building.

READ: Patients at Cornwall Regional Hospital to be relocated amid air quality issues

Some $1.3 billion is being set aside to be spent on phase 2b of the project, which includes engineering works and the installation of a new heating, ventilation and air conditioning system.

“Then from there we go to the third and final phase, which we hope to conclude in selecting a contractor this financial year, for the total completion and I would this would cost another $3 billion or there about,” the minister stated.

Tufton said the last phase of the project will be advertised internationally .

“A hospital is not an apartment building. It is an extremely complicated environment that involves airflow and other issues around infection prevention and control, and experience plays an important part in the managing of the overall project,” Tufton argued.

Guy, who in January had estimated that another $12 billion would be needed to complete repairs at the facility, mocked Tufton in the chamber over the delays.

READ: Tufton brushes aside Guy’s $12b estimate for CRH’s restoration

“Minister, it is said that once bitten, twice shy, it is about four times now you have been bitten so far in terms of a date to completion,” he said.

Tufton disclosed that it would take just under $6 billion to complete the project.