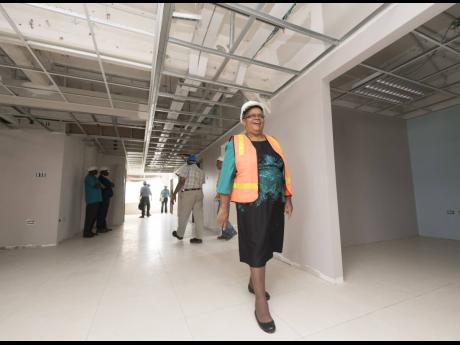 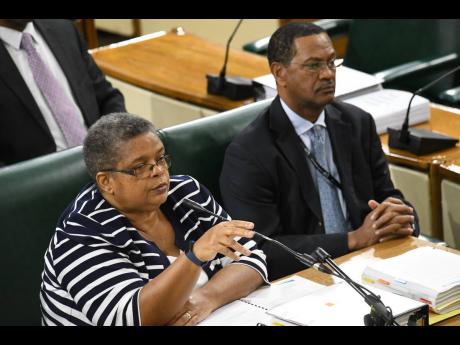 File
Carol Palmer, permanent secretary in the Ministry of Energy, Science and Technology, and Winston Watson, managing director of Petrojam, answering questions at a Public Accounts Committee meeting at Gordon House in Kingston on Tuesday, April 9, 2019.
1
2

“Nothing is more beautiful than spring,” Gerard Manley Hopkins opens his poem Spring, a conclusion using hyperbole, which means an exaggeration and not to be taken literally. But Carol Palmer, permanent secretary (PS) in the Ministry of Science,...

“Nothing is more beautiful than spring,” Gerard Manley Hopkins opens his poem Spring, a conclusion using hyperbole, which means an exaggeration and not to be taken literally.

But Carol Palmer, permanent secretary (PS) in the Ministry of Science, Energy and Technology, is still the most “formidable, feared and fearless public servant and that’s not a hyperbole”, said a top-level technocrat last week, a description which found agreement with 19 past and present senior public servants.

Cut from extraordinary Jamaican fabric manufactured years ago and which appears out of production, she recounts with pride and admiration the sacrifice and influence of a woman who gave everything for the betterment of her girls – her mother.

“My mother was very selfless. She had seven girls, and she gave us her all. She wanted us to be the best that we could be. And I remember she would say to us, ‘If you are going to be a garbage collector or a street cleaner, then you must be the best that you can be’. Then she also told us that if I am to see you in the newspaper, it must be for good … ,” Palmer recalled – and the warning never left her.

Unapologetically, she embraced the “serious and stern values” of her mother, albeit with a little more democracy. Standards of “integrity, honesty, truthfulness, working hard” were reinforced by a mother who reminded her children that education was the path for their mobility.

“Values, which people appear not to see as important today. Right and wrong were also important to her,” she said of her mother, who was described as a humble little lady who taught right and wrong and cross-examined them if it was breached.

Children today, Palmer reflected as she spoke to The Sunday Gleaner ahead of tomorrow’s International Women’s Day, lack consistency in discipline, which has led to a breakdown of standards.

Brought up when stares hit hard as the bruising belt, her piercing stare of repudiation is the most poignant evidence that something is wrong.

Many have been stared at, and stared down.

The last time the stare was publicly displayed was during a parliamentary committee meeting on the operations of the ministry she now heads.

She was being questioned in the continuing probe of actions under a former minister. Unable to respond, she told the committee that a requested report was not sent before her appearance. A technocrat claimed the report was emailed, but long after she would have checked as she was en route to the meeting.

She stared. The meeting went silent. The technocrat bled, but no one offered sympathies.

Carol Palmer takes no prisoners and everyone knows that.

“We are short on values, we are short on standards, and we are short on having the right attitude to work, conduct, to how you relate to others. I am amazed almost on a daily basis how we operate and we don’t care,” she said with much sadness.

In her early years, the public sector was a most privileged place to be employed, despite the physical conditions of the plants – from courthouses to hospitals and police stations. For them, it was a privilege to serve, despite the pay.

She is now disillusioned by the prevalence of dishonesty as individuals appear happy to collect a salary for little work and is saddened by the deterioration of standards in the sector.

It came during the time she sat at the apex of the Ministry of Justice – and also the public service – as one of its visionaries. With ocean-size contribution to public policy, which impacted training for workers in the system, she was hailed as a progressive reformer of the system. With extensive knowledge of the governance processes and operations, Palmer chaired the sector from its apex, knowing full well it takes the hit for all things wrong in government.

“I view my awards with a lot of humility, because I haven’t done what I have done for the awards. I never even thought about the awards. I worked. I just felt that I needed to do the best job that I know how to do. And in recent readings that I have been doing, it comes from my Christian conviction, where you do on to man as if you were doing on to God,” Palmer told The Sunday Gleaner, affirming her faith.

Also recognised with a national honour – Member of the Order of Distinction, Commander Class – the Seventh-day Adventist elder is unashamed of her approaches to divine power, telling The Sunday Gleaner that she is unable to do anything of herself.

“It’s the foundation for my being kept afloat … . If you put your faith in human beings, you are going to lose,” Palmer affirmed.

Financial greed, the absence of standards and a lack of reverence to God account for much of the nation’s ills, Palmer believes.

The distinguished public servant and visionary reiterates that integrity has been the hallmark of her entire life and, without a thought, would opt again for the public sector, notwithstanding that the dangers of upholding standards and saying no.

A strategic thinker, she takes pride in achieving the mandates of the administrations she has served.

She is married with three children, and has three grandchildren, two of whom currently reside with her.

Carol Ann Palmer prides her culinary skills like she does her integrity.

She is celebrated every day, but especially on International Women’s Day.