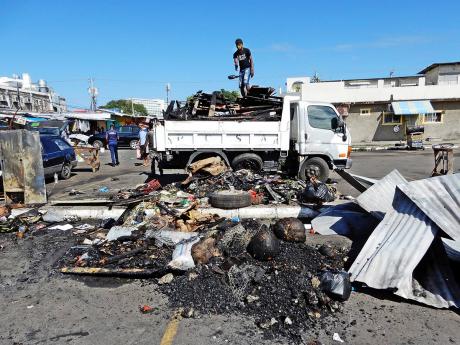 PHOTO BY CARL GILCHRIST
A workman stands atop a truck loaded with debris from Saturday night’s fire at the Ocho Rios Market as cleanup work began on Sunday morning. Fire personnel said that the early clean-up could compromise efforts to ascertain the cause of the blaze. 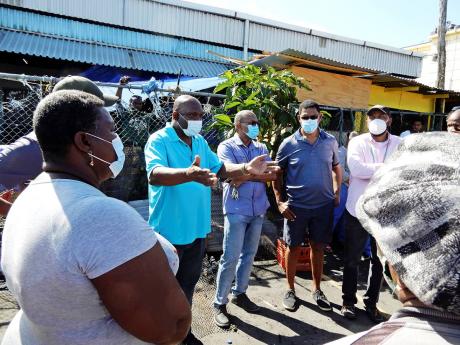 Hampered by curfew restrictions imposed to prevent the spread of COVID-19, several vendors were unable to respond fast enough to save their goods on Saturday night as fire razed several stalls at the Ocho Rios Market in St Ann.

The St Ann Fire Department reported that it received a call shortly before 10 p.m. and that a unit from the Ocho Rios Fire Station responded immediately. That unit was later assisted by another unit from the St Ann’s Bay station and managed to put out the blaze within an hour.

District Officer Wilton Pettigrew, who was on the scene Sunday morning, said the clean-up, which had started prior to the firefighters’ return to conduct investigations, had hampered the fire department’s efforts to ascertain the cause of the blaze.

“We came back to do the investigations and saw people compromising the scene,” Pettigrew said.

There was no guarantee that anything would have been saved, but for Empress Hoosk, one of eight vendors who lost all their belongings in the fire, it was a tough pill to swallow.

“I lost everything. I used to sell liquor, snacks, everything,” she reported.

Hoosk said because of the curfew, she was unable to come out to salvage any of her belongings.

“I couldn’t tell what happened because we went in, curfew hours. We get the call, we could never run out neither because through the police them, we haffi careful ... .

“We don’t know what cause the fire, nothing at all, we don’t know. Right now, mi weak to the system,” Hoosk added.

Another vendor, Kevin Lewis, was heartbroken at the devastation.

“Look,” he added, pointing to the mountain of debris being cleared. “Look. A lie mi a tell?”

The vendors affected were located near the car park, outside the main market building. They sold a variety of wares, including foodstuff. The fire has left them in a distress as they are now faced with having to seek funds to restart their businesses.

An estimate of losses was not available up to press time.

Meanwhile, mayor of St Ann’s Bay, Sydney Stewart, who, along with several councillors and officers of the St Ann Municipal Corporation visited the scene Sunday morning, told T he Gleaner that the local-government body would urgently help get the vendors back on their feet.

“It was really unfortunate what took place last night. Eight people were affected, eight shops as I understand, so we’re offering the eight people a temporary space in the car park,” Stewart said.

The mayor explained that the vendors were given permission to construct temporary stalls, at their own expense, but the municipality will now construct permanent accommodations.

“We’ve had that discussion with them and we should be able to put these people back into operation within a month,” he told The Gleaner.