Cooperative distances itself from unruly man 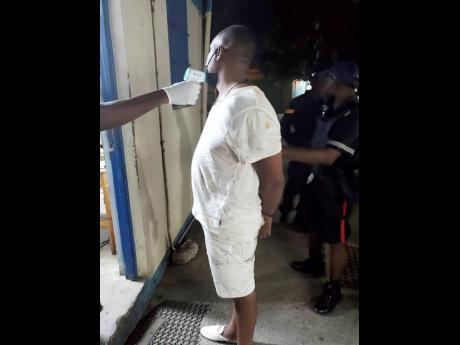 Contributed
A man seen in a viral video disrespecting police personnel at a Hellshire beach on Sunday has his temperature checked as he is processed before being placed in lock-up yesterday. 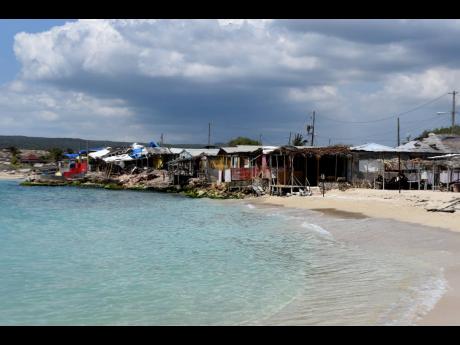 The police yesterday evening took a man into custody after he failed to put on a mask in line with infection-control orders under the Disaster Risk Management Act when instructed to do so at a beach in Hellshire, St Catherine, on Sunday.

In a video which has gone viral on social media, a man claiming to be Stephen Mike Whitter stood in steadfast resistance, claiming he would not be leaving the property – a suggestion that he and others at the location were asked to leave by cops.

He verbally chastised and rebuked officers as other persons in the background egged him on.

He was fitted with a mask and had his temperature checked before being placed in lock-up, the police said.

The police did not verify his identity.

In the wake of the incident on Sunday, a director of the Half Moon Bay Beach Fisherman Cooperative Society Limited, Gladstone White, has distanced the organisation from the man, saying that he is not a proprietor and that his views do not reflect those of the business operators.

Based on a report made to the cooperative, the men approached the property and disobeyed the instruction of the security guard on duty at the closed gate, claiming that it was public property.

The report said that the man in the video went straight to the beach area and proceeded to remove a barrier built by the group to prevent persons from swimming at the beach, claiming not to be a prisoner. The police were called in response to the situation.

The incident has left the entrepreneurs fearing for their safety.

“If the police come and haffi turn back, weh can we do?” one person asked yesterday as The Gleaner visited the location.

They said they first planted the barrier around April last year and made some improvements just last Monday. However, they said they will not be reinstalling the fencing because they are afraid of possible clashes based on the man’s behaviour.

White, who is also director of Jamaica Fishermen Cooperative Union, told The Gleaner that with no recreational activities taking place, revenues from entry fees have dried up and restaurant operators have been paying for the security guards and the upkeep of the fishing village out of pocket.

“We had known that there would be an influx on the weekend, so we tried to prevent that. In doing so, we had dialogue with the police to seek their presence for this weekend. We are still in dialogue for that,” White said, explaining that the society had met last Wednesday to revise operational strategies.

Early in the local COVID-19 outbreak, beaches were order closed initially for three month and the operations at the Hellshire facility have struggled to bounce back since. They were recently ordered to once again suspend recreational activities due to an islandwide surge in COVID-19 cases.

“People come here for the beach and for the food and the beach not open anymore and very few people come for the food,” said one proprietor, who estimates a 75 per cent decline in business.

The operators claim that the Social Development Commission has rated their compliance to COVID-19 protocols at 98 per cent.